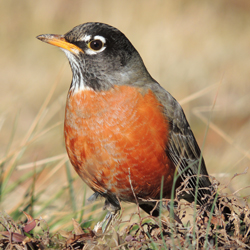 The American Robin was adopted as the official State Bird by the General Assembly in 1943. The name Robin is applied to a number of familiar birds, but in North America it is the migratory thrush. (Turdus migratorius.)  Our Robin, a true thrush, is a migratory bird with a reddish brown or tawny breast and a loud cheery song. It was first called Robin by the early colonists, in remembrance of the beloved English bird. Despite the protests of some naturalists, we still retain that traditional name. Familiar in the summertime throughout North America, the American Robin is seen from Alaska to Virginia. Most people do not know that many Robins spend the entire winter in New England. They roost among the evergreens in the swamps where they feed on winter berries. Reproduced from the Connecticut State Register & Manual with permission of the Secretary of the State.