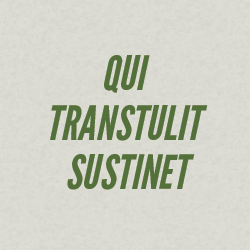 The motto "Qui Transtulit Sustinet," (He Who Transplanted Still Sustains), has been associated with the various versions of the seal from the creation of the Saybrook Colony Seal. While the origin of the motto is uncertain, the late Charles J. Hoadly, a former State Librarian, suggested in an article entitled "The Public Seal of Connecticut," which appeared in the 1889 edition of the Connecticut State Register and Manual, that we look to the 80th Psalm as a possible source. "Thou hast brought a vine out of Egypt: thou hast cast out the heathen, and planted it."  Reproduced from the Connecticut State Register & Manual with permission of the Secretary of the State.