(HARTFORD, CT) – Governor Ned Lamont today joined legislators and stakeholders in the state’s criminal justice system at a bill signing ceremony to commemorate the adoption of a new law the governor proposed that will provide the public with greater information regarding how prosecutors make decisions in criminal cases, particularly when it comes to the screening and charging of cases, pretrial and bail recommendations, diversion to programs, case processing, plea negotiations, and sentencing recommendations.

The governor explained that he proposed the reforms because he feels that providing this information to the public is an important step toward ensuring that those who are impacted by the criminal justice system have assurance that justice is being attained in the fairest ways possible.

“By signing this act into law, we commit our state to shedding light on information from the front end of the criminal justice system, which has historically been a mystery to many,” Governor Lamont said. “The prosecutorial decision-making data required by this act will be useful for stakeholders from throughout the system, helping inform improved policies and practices.”

Even before it took effect, the new law, which is the first of its kind in the nation, already generated attention from stakeholders throughout the country. This summer, North Carolina Congresswoman Alma Adams used the Connecticut legislation to inform a proposal she introduced that would enact similar reforms on the federal level. In June, the Congresswoman convened a forum on Capitol Hill to discuss the reforms and invited several officials from Connecticut to participate, including Marc Pelka, Governor Lamont’s criminal justice advisor.

“By introducing this bill at the start of his term, Governor Lamont convened a wide array of stakeholders around the goal of better measuring and tracking criminal justice system outcomes to help victims, people in the justice system, and taxpayers alike,” Pelka said. “By signing this bill into law – surrounded by prosecutors, victim advocates, criminal justice reform advocates, and others – Governor Lamont is making Connecticut a national leader in requiring the routine collection, analysis, and reporting of prosecutorial decision-making data.” 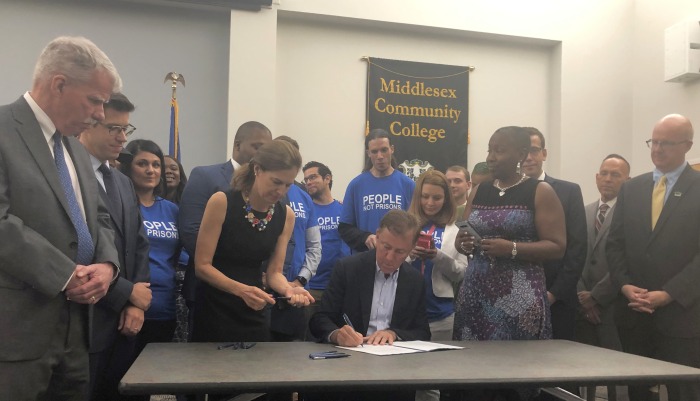 The act requires the Office of Policy and Management (OPM) to immediately begin collecting and analyzing existing prosecutorial data within the criminal justice system, and to present an analysis of such data to the state’s Criminal Justice Commission no later than July 1, 2020. Beginning in 2021, the Division of Criminal Justice, in consultation with the Department of Correction, the Judicial Branch, and the Criminal Justice Information System Governing Board, will be required to provide detailed data to OPM relating to charges, diversionary programs, bail requests, plea deals, contact with victims, sentencing recommendations, and demographics. OPM will then be responsible for incorporating that data into its analysis and presentation in July 2021, and annually thereafter.

“This new law takes a vital step toward ending the injustices and inequities in our current criminal justice system,” State Representative Steve Stafstrom (D-Bridgeport), co-chair of the Judiciary Committee, said. “It will help us see how prosecutors make decisions about charging people, forming plea agreements and sentencing recommendations. We can then make future legislative policy decisions based on that data. The collection of data also will help the Division of Criminal Justice and prosecutors in doing a better job in carrying out their critical public safety responsibilities. I thank Governor Lamont and his staff for bringing this initiative forward.”

“Transparency about prosecutors’ decisions and public hearings on prosecutors’ appointments are just the first steps toward creating a justice system that ensures true public safety by ending mass incarceration,” Gus Marks-Hamilton, ACLU of Connecticut Smart Justice field organizer, said. “Smart Justice has been calling for this law for more than one year, because while prosecutors hold people’s lives in their hands, Connecticut residents have long been shut out of information about their decisions. People across the country, including all of us at Smart Justice, will be watching closely to monitor how Connecticut implements this groundbreaking opportunity for prosecutorial transparency. Everyone has a role to play in ending mass incarceration and eliminating racism in the justice system, and this new transparency law is one way for prosecutors to begin doing their part.”

The legislation is Public Act 19-59, An Act Increasing Fairness and Transparency in the Criminal Justice System. It was approved by legislators in both chambers of the General Assembly by unanimous votes.