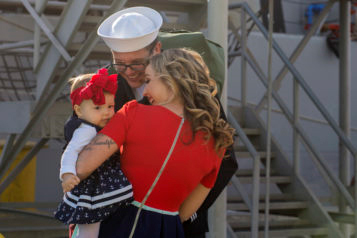 Naval family embraces after return from sea.
Washington, DC - Officials may consider the quality of local schools and the ability for military spouses to transfer professional credentials following a transfer when deciding where to locate military missions, the three service secretaries told the National Governors Association in a letter sent Friday. “We will encourage leadership to consider the quality of schools near bases and whether reciprocity of professional licenses is available for military families when evaluating future basing or mission alternatives,” stated the letter signed by Army Secretary Mark Esper, Navy Secretary Richard Spencer and Air Force Secretary Heather Wilson.
The secretaries also highlighted a related issue in the letter — the extent to which school systems ease the burden of transition for military children regrading transferring credits and joining sports teams and clubs after the start of the school year. “Some school systems recognize this and accommodate military families during transfers. These schools should be commended and emulated,” they wrote.
The letter comes as the nation’s governors opened their winter meeting Saturday in Washington. It noted that the drawbacks to military service most commonly cited by families include students’ difficulty assimilating into local school systems following a duty station transfer, the quality of schools available, and the ability of spouses to obtain jobs and sustain careers. Eliminating barriers for spouses to transfer professional licenses, for example, would improve military families’ quality of life, according to the secretaries.
“We realize improving schools and changing laws or regulations regarding professional licensure will take time. Over the long term, however, leaders who want to make a difference for the military and our missions will make the most impact if we focus on what matters. Reciprocity on licensure and the quality of education matter,” the letter concludes.
Chick here for the Joint Letter from Secretaries of the Army, Navy & Air Force