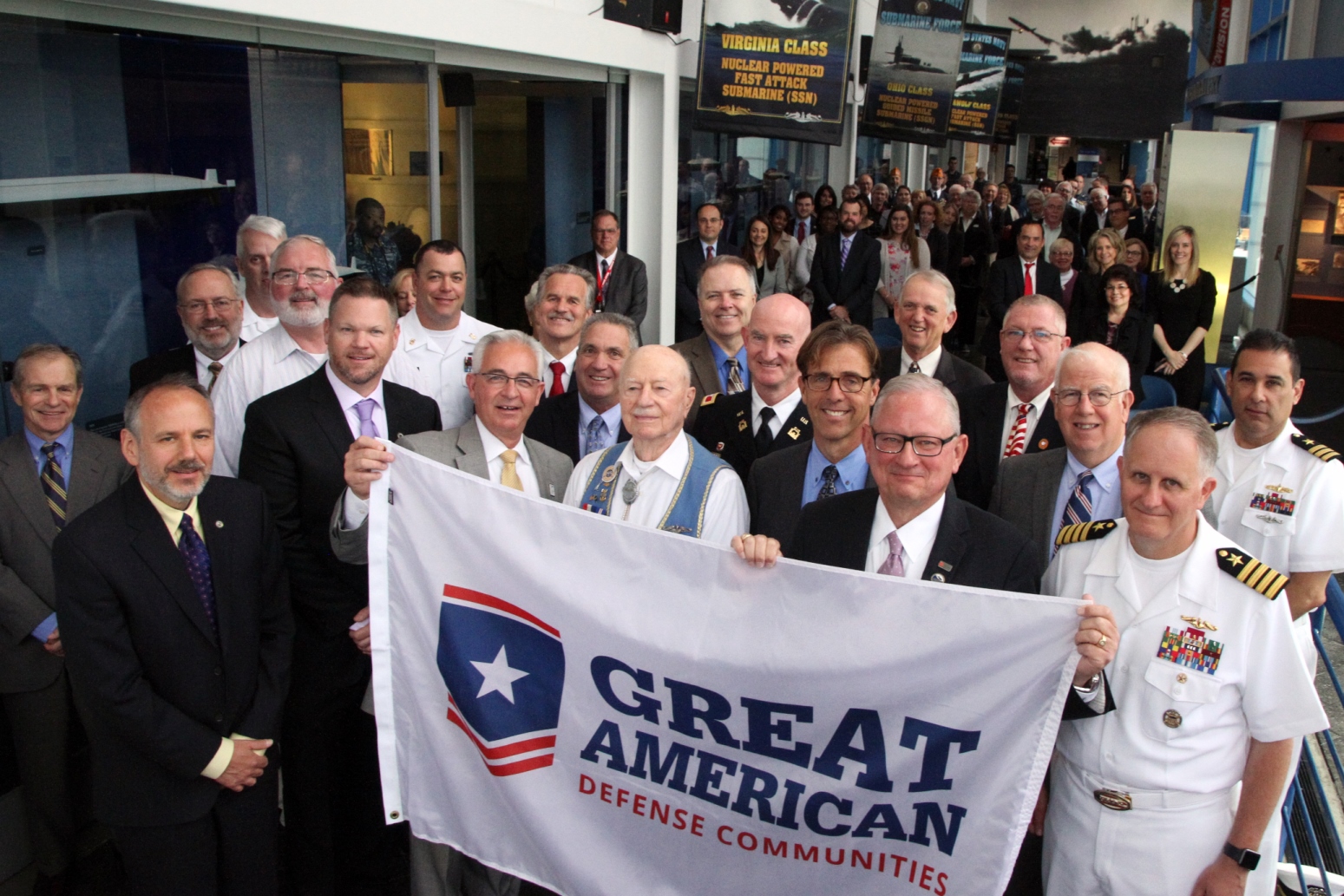 Photo by Mark C. Jones
Local elected officials and community and military leaders and friends comprising the
Southeastern Connecticut Council of Governments (SCCOG) and it's communities stand
behind the flag designating Southeastern Connecticut as a Greet American Defense
Community following a ceremony held a the Historic Ship Nautilus and Submarine Force
Museum.
GROTON, Conn.  – It’s official: Southeastern Connecticut is a Great American Defense Community!
The Association of Defense Communities (ADC) made the public declaration during a Naval Submarine Base New London (SUBASE) ceremony June 6, 2017 commemorating the 75th anniversary of the Battle of Midway.
Local elected officials and community and military leaders comprising the Southeastern Connecticut Council of Governments (SCCOG) prominently attended the ceremony held at the Historic Ship Nautilus and Submarine Force Museum.
“The attack on Pearl Harbor thrust us from a Nation on edge under isolationism, to become the world’s ‘Arsenal of Democracy’” said Capt. Paul Whitescarver, SUBASE commanding officer. “Southeastern Connecticut led the charge, before, during, and after the Second World War. And its communities never stopped. The Navy, Coast Guard, and National Guard installations and activities throughout Southeastern Connecticut truly enjoy a sense of community building, integration, collaboration, and support that is second none.”
A key underpinning to that collaboration and support is the SCCOG which is comprised of the leadership of the 22 cities, towns, and boroughs, as well as the two Native American tribal nations, which make up the region.
“Residents from Southeastern Connecticut and their Council of Governments continue to set the national standard as outstanding host communities,” said Bob Ross, Executive Director of the Connecticut Office of Military Affairs. “People from across the region collaborate in many ways to help our military bases accomplish their missions and provide the highest possible quality of life for service members and their families.”
Beyond the SCCOG, collaboration and support are evident in a myriad ways from the Military Superintendents Liaison Committee to the Chambers of Commerce, noted Ross.
The Military Superintendents Liaison Committee offers a bridge between leaders in education, the services, and the community to work together on behalf of military children and families; and the local Chambers of Commerce, through their Military Affairs Committee and other associations, raise awareness and promote the contributions of service members, their families, and their children in the community.
“Our military families come from all over the country,” said Ross. “While they are here, we want them to enjoy a great opportunity to live in New England and feel welcomed in our neighborhoods, schools, and businesses.”
Recent state and community-led, all-encompassing celebrations have underscored the patriotism and pride of Southeastern Connecticut’s communities and citizens, highlighted Ross.
In 2015, Coast Guard Summer proclaimed New London’s designation as a Coast Guard City. The summertime celebration also observed the service’s 225th birthday and the 100th anniversary of the U.S. Coast Guard Academy transitioning to its current location in New London.
Last year, the state and local communities marked Connecticut’s Submarine Century. The year-long celebration honored the local heritage and global impact made over the last 100 years by those who have, and those who continue, to design, build, and operate United States submarines. A cornerstone of the observance was the commemoration of the centennial anniversary of SUBASE, the nation’s first, permanent continental submarine base, and Naval Submarine School.
Southeastern Connecticut and the SCCOG’s recognition is well deserved affirmed Ross.
The SCCOG was among eight total military communities in the United States that were selected for the 2017 honor as a Great American Defense Community (GADC).
“All eight in the 2017 class of honorees truly embody the ideals this initiative was designed to celebrate - making host communities for our nation’s military installations ‘Great Places to Call Home,’” said Mike Cooper, President of the ADC.
Cooper presented the attending municipal and military leaders from the SCCOG a Great American Defense Community flag. When not bringing it to events to highlight community pride and recognition, the SCCOG will keep the flag on display at their offices in Norwich.
The GADC Award program was designed by ADC in conjunction with the U.S. House and Senate Defense Communities Caucuses “to recognize and celebrate communities whose exceptional commitment to improve the lives of service members, veterans, and their families serves as a model for all communities.”
This year’s class was selected by a panel of defense community advocates and experts from dozens of nominees based on the broad range of efforts each area carries out on behalf of military personnel and their families, covering factors such as education, job opportunities, housing, family support during deployments and community appreciation.
“I could not be prouder to be stationed here in Southeastern Connecticut and live in a Great American Defense Community,” concluded Whitescarver.