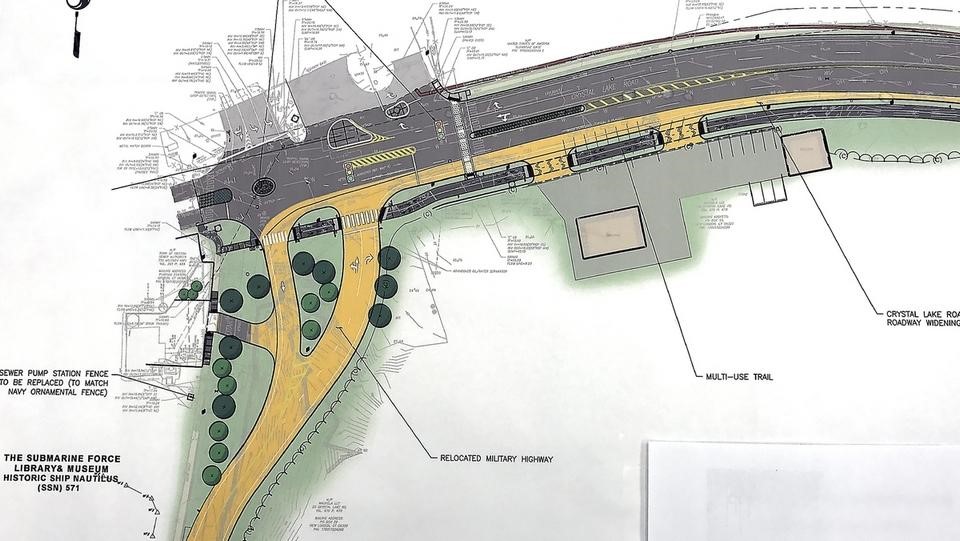 Plans show the proposed improvements to Crystal Lake Road and Military Highway, which intersect near
the entrance to the Naval Submarine Base. The $5.5 million reconstruction project is underway to improve
the two roadways that, officials say, will resolve significant public safety and traffic management problems.
(Courtesy of Town of Groton)
Groton — A $5.5 million reconstruction project is underway to improve the roadways near the Naval Submarine Base that, officials say, will resolve significant public safety and traffic management problems.
Plans call for widening both Military Highway and Crystal Lake Road, which intersect near the entrance to the base, realigning the two roads, including a new traffic signal and creating a bike and pedestrian pathway.
The project has been years in the making — more than 30 years, according to Groton Town Manager Mark Oefinger, who said the concept has been kicking around since the early to mid-1980s. With the 1986 opening of the Submarine Force Library & Museum and the Historic Ship Nautilus adjacent to the base, "we took a two-lane road and made it a four-lane road without any significant improvements," he said.
The result is that Crystal Lake Road essentially has become a glorified driveway for the base, he said.
Currently, the two-lane Military Highway lines up with the main exit from the base. An example of why that can be a big problem: In June 2016, a New London man led police on a high-speed chase, which ended with him crashing his car into the base's main gate.
The project also will include the creation of a multi-use pathway for bicyclists and pedestrians along the south side of Crystal Lake Road. The pathway will extend from Crystal Lake Road and follow east along Route 12 until the intersection with South Pleasant Valley Road.
The improvements will provide greater capacity for vehicular traffic and ultimately resolve significant public safety and traffic management problems for the base, officials say.
The reconstruction project, which started in April, is primarily funded by federal monies, with the state and town each contributing 10 percent of total funds. The road improvements are expected to be done by late fall or early winter. The project is expected to shut down during the winter and resume in the spring, when it's anticipated that remaining work like sidewalks and landscaping will be completed.
Bob Ross, executive director of the state's Office of Military Affairs, would like to see Crystal Lake Road be renamed when the project is complete. Crystal Lake, which was located on the base, was filled in many years ago. Ross is proposing the town of Groton form a committee or hold a public competition to rename the road to something like "Submarine Capital Parkway" to reflect that "this is the new gateway to the Silicon Valley of undersea warfare."
The project has included the acquisition of private land. In 2013, the town began leveling the former Fusconi Cleaners, the abandoned property opposite the main gate of the base, as part of the larger improvement project. The State Bond Commission awarded $455,000 to the town to buy the 1-acre property. The Navy saw the abandoned building as a security concern because it couldn't see what was going on inside or whether there were any "bad actors" inside, Ross said.
To the left of Karn's Automotive Center, which is across from the northern border of the base, is another abandoned building, which many officials would like to see torn down. The building and Karn's sit on private land, and Oefinger said the town is looking to identify some funding sources and approach the property owner about the abandoned building.
Further down the south side of Crystal Lake Road toward Route 12 are four apartment buildings. The current parking configuration for those buildings has vehicles backing up into Crystal Lake Road. Plans call for building a parking lot between two of the buildings, away from the side of the road.
To the south of those buildings are many acres of undeveloped land that is privately owned. The area is part of a joint land use study underway that is evaluating compatibility issues between the base and surrounding areas.