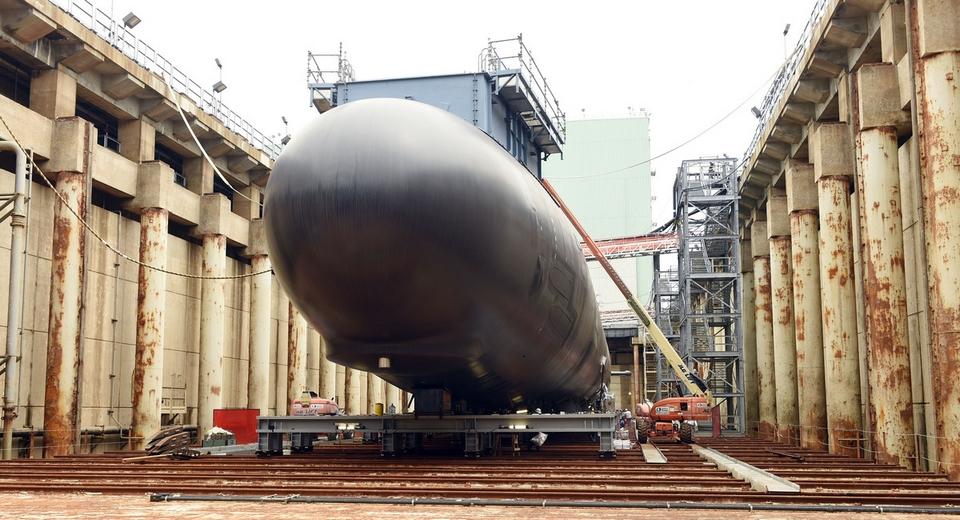 Workers at General Dynamics Electric Boat in Groton prepare the Virginia-class attack submarine
Illinois for float-off on July 30, 2015. The company announced Saturday, Aug. 27, 2016, that it
has delivered the boat to the Navy early and under budget. (Sean D. Elliot/The Day)
Groton — Electric Boat announced Saturday that it has delivered the nuclear attack submarine Illinois to the Navy early and below budget.
The Illinois was delivered four days early, and more than $100 million below target cost, according to EB's director of communications, Tim Boulay.
The $2.7 billion submarine is the 13th ship in the Virginia class, the most advanced class of submarines in the world.
The Virginia program, which is built by Electric Boat and Newport News Shipbuilding, has been hailed as a success for the on-time and under-budget delivery of the submarines, despite setbacks when inspectors discovered unauthorized and undocumented weld repairs that affected at least three of the submarines.
Shipbuilding partners EB and Newport News already have delivered 12 Virginia-class submarines to the Navy, and 11 of the boats are in various phases of construction between EB's facilities in Connecticut and Rhode Island, and Newport News.
“Like the previous ships of the class, Illinois has been designed specifically to incorporate new technologies that will provide the capabilities required to meet emergent threats,” EB President Jeffry Geiger said in a statement.
"This enables the Virginia Class to make unique and significant contributions to national security for decades to come,” he said.
Geiger credited the Navy, the shipbuilders and the supplier base for the cost and schedule achievements.
Virginia-class submarines displace 7,835 tons, with a hull length of 377 feet and a diameter of 34 feet.
They are capable of speeds in excess of 25 knots and can dive to a depth greater than 800 feet, while carrying Mark 48 advanced capability torpedoes and Tomahawk land-attack missiles.
The Illinois is slated to be commissioned in Groton this fall, at which point the ship will join the Navy's fleet of 52 attack submarines.
The submarine was christened Oct. 10, 2015, by ship sponsor first lady Michelle Obama at EB's Groton shipyard.
The company, which currently has 14,500 employees, has beefed up its labor force due to growing workforce demand, led by the Virginia-class program now and the recently named Columbia-class program, a new class of ballistic-missile submarines that will replace the aging Ohio-class boats in the future.