Coast Guard Museum Association Working To Cultivate Next Donor Base
The Day
By Julia Bergman
April 10, 2016 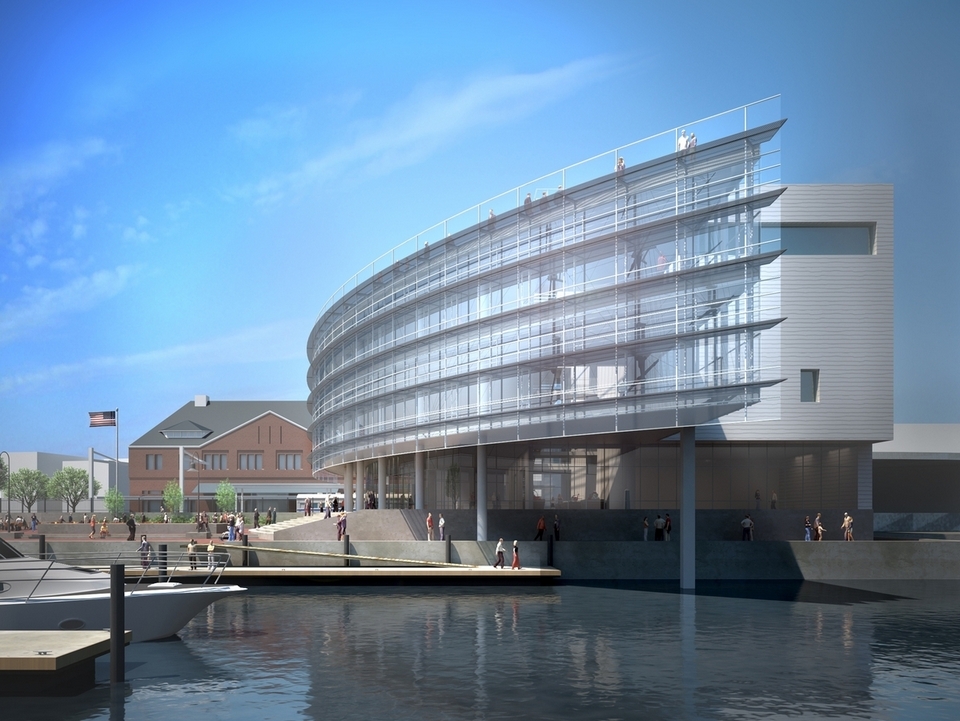 Courtesy National Coast Guard Museum model rendering.
New London — After securing $35 million in donations and pledges, the National Coast Guard Museum Association is now cultivating its next donor base.
Support for the museum has remained at the $35 million level, and no major fundraising announcements have been made since late January when the association announced $4 million in pledges. The $35 million includes a $20 million commitment from the state for a pedestrian bridge to provide access to the museum.
The association is hoping for $30 million in federal support to help with the interior of the museum after Connecticut's congressional delegates helped to change a federal law that prohibited the Coast Guard from providing any funds for the museum. It's also hoping to secure larger donations through the formation of the Secretaries' Circle, made up of 17 former cabinet-level secretaries of the Department of Homeland Security or the Department of Transportation. The secretaries hold invitation events throughout the country to help promote the museum effort.
The total cost of the estimated $100 million project could go up depending on final plans and the ultimate size of the museum. The association's board must approve the final cost of the museum.
"Recently we've been more about developing the next donor base," said Wes Pulver, the association's executive director.
He said he feels "very confident" about future fundraising based on recent contacts with companies, which, he said, have been very energetic about the museum effort, and have been quick to take calls and meet with museum officials. He declined to identify the companies, citing ongoing discussions.
"We have about $15 million of active discussions with corporations," Pulver said. "But we have a strategy that has almost $60 million of different opportunities out there for us. We anticipate continuing to expand that strategy because it's not just building a museum, it's sustaining a museum."
Fundraising areas the association has yet to focus on include bequests, foundations and Coast Guard retirees and volunteers.
"You have to realize that the time schedule is not yours," Dick Grahn, CEO of the museum association said. "It's the donor's."
He said a number of factors play into that. It could be that a corporation has already done its gifting for the year. In the case of the oil and gas industry, low oil prices might mean now is not a good time to donate.
"The stock market was down at the beginning of the year. It's back up again. So there's better times to talk to individuals," Pulver said.
The association is in the midst of hiring a development director to focus full-time on fundraising. It's whittled down a pool of almost 150 candidates to four.
A job advertising lists the salary, including benefits, for the position as between $50,000 and $62,400 annually. That would bring the association's full time staff to five people. A portion of salary costs are paid for by restricted donations.
"There's a lot of stuff that's going on that's being handled by four people," Grahn said, citing legal work, project management, collections, working with various agencies, and other duties of the association.
The association pays $20,000 a month to Odell, Simms and Lynch, which specializes in fundraising for organizations and museums, to help with outreach for the $100 million national campaign such as conducting research, identifying potential donor bases and crafting fundraising proposals.