Sale of Union Station is Near on Behalf of Coast Guard Museum Group
Julia Bergman
The Day
December 12, 2014 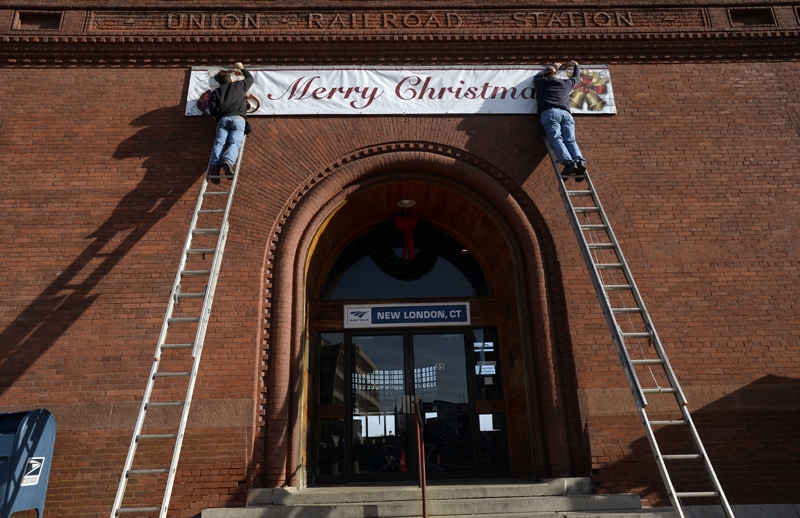 A third-party investor would buy the Union Station in New London on behalf of the Coast Guard Museum Association. The historic building was decorated for the holidays earlier this month.Tim Martin/The Day
New London — The Coast Guard Museum Association and the owners of Union Station appear to be close to a deal in which a third party investor would buy the station on behalf of the association.
In an email Thursday evening in response to questions from The Day, Todd O'Donnell, who owns the station along with Barbara Timken, wrote, "A party affiliated with the CG Museum has executed an agreement to buy Union Station at the end of the year subject to standard closing conditions."
Suzanne Simpson, director of special operations for the association, said the investor would own the building, but the association would be able to give input on future use.
The station sits adjacent to the future waterfront location of the National Coast Guard Museum.
After years of talks, the museum is now in the works. In November, the board of directors of the association released new, and more detailed, renderings of the museum, which include a pedestrian bridge that connects to the museum from Water Street. The state has committed $20 million for the design and engineering and construction of the bridge, as part of the total $100 million museum project, John Johnson, treasurer for the association, said.
"At some point we need to have control of Union Station. That's pretty well known around town. I don't know when that's going to happen, but we think it's imminent," Johnson said Wednesday. "Once we get that we can then start doing the design and engineering for the bridge because we can't design and build it unless we own it (the station)."
Future uses for the building haven't been announced.
"I don't think anybody is discounting any possibility of what to do with it," Johnson said.
The association is currently raising funds and hopes to be able to get $30 million from the federal government.
"That's our desire, to get federal legislation changed that will allow the federal government to help us in the bricks and mortar part of the museum. We feel justified in doing that because it's been done for the Navy. It's been done for the Army. It's been done for the Marines. And it's been done for the Air Force," Johnson said, adding that U.S. Sens. Richard Blumenthal and Chris Murphy, and U.S. Rep. Joe Courtney, D-2nd District, "have been incredibly supportive of that."
In total, Johnson said, the association is charged with raising between $50 million and $53 million, of which it has raised $1.5 million. That has come from the community, including Coast Guard retirees, and local businesses. The first corporate sponsors were Dime Bank and Saybrook Point Inn and Spa, which each gave $15,000. The association's chairman, James Coleman Jr., contributed nearly $250,000 to the campaign.
The association currently has requests out for $6 million in funding. Johnson said, "We are fairly confident of having those funds in hand or commitments in hand in the first quarter of 2015."
"There's obviously a lot more to this campaign than just raising money. It's a lot about credibility," Johnson said. "It's a lot about doing things that are perceived by the public as action steps."
The association has been working with Virginia-based Odell Simms and Lynch, which specializes in fundraising for organizations and museums, on outreach for its national campaign. Johnson would not specify how much the association is paying OSL but said it comes out of the contributions received. The focus of the national campaign is on the coastlines of the United States, Johnson said.
The association hopes to raise awareness and money through some high-profile dinners scheduled to start next year. Former state Sen. Catherine Cook, a member of the association's board of directors, along with Rear Adm. Sandra Stosz, superintendent of the Coast Guard Academy, and Ellen Engleman-Conners, deputy director of governmental and public affairs for the Coast Guard, came up with the idea to create an entity called the Secretary's Circle.
"The idea being all of the former secretaries and undersecretaries of the Department of Transportation, Department of Treasury and Department of Homeland Security, those are the three different agencies that the Coast Guard fell in under," Johnson said.
Those who have accepted the invitation to join include Adm. James Loy, former commandant of the Coast Guard and a member of the board of directors of the association; Tom Ridge, former governor of Pennsylvania, who served as the first secretary for Homeland Security; Norman Mineta, former U.S. secretary of transportation; Mortimer Downey, former deputy security of the U.S. Department of Transportation; and Michael Jackson, former deputy secretary of Homeland Security.
The members of the Secretary's Circle will sponsor dinners around the country to raise money and awareness, with the first being in March in Florida. The lead sponsor is former golf champion Arnold Palmer, an honorary co-chair of the association, who served in the Coast Guard.