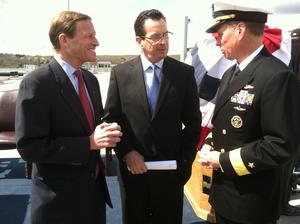 “This is part of the ongoing and dynamic transformation of our base,” Denno said of the 65-foot-wide pier, about twice the width of its predecessor. The pier, which is able to hold two ships at a time, is used for submarine maintenance and is one of the base’s three “modern” piers.

State government has contributed millions to projects at the base, although the pier was paid for entirely with federal money, according to Bob Ross, executive director of the state Office of Military Affairs and a former Salem first selectman.

Prior to the pier dedication, Malloy and Lt. Gov. Nancy Wyman toured three of four projects the state has contributed to, including a galley, or cooking area, that trains chefs in how to operate in the narrow quarters of Virginia- class submarines. Malloy and Wyman were among those cutting ribbons at the galley in Cross Hall, and at the pier.

The state contributed $740,000 to the galley project, which was built by a group of contractors, including Norwich-based Bartol Heating. The state has contributed more than $10 million since 2009.

“We’re putting our money where our mouth is,” Chamber of Commerce of Eastern Connecticut President and CEO Tony Sheridan said. “The bigger message is to the military community in general — we value you.”

Sheridan called military personnel and their spouses “smart people that uplift the community.”

Rodolico praised the level of attention Malloy and others are showing the base. Ledyard is involved in a land transaction with the state that will create a wider buffer zone around the base and increase the base’s value to U.S. Department of Defense planners.

State leaders are paying increasing attention to the base amid fears that the Pentagon will again seek to close the 97-year-old facility.
Malloy thanked Courtney for being vigilant in keeping abreast of trends that might lead to the base’s closing. Courtney said the base has received $80 million in new construction projects since 2007.
“Today’s ribbon-cutting at Pier 31 marks the completion of yet another project that modernizes the infrastructure and increases the strategic value of Sub Base New London,” Courtney said. “... the base’s synergy with Electric Boat and the strong support from the state of Connecticut have put (the base) in a stronger, more secure position going forward.”
Malloy spoke positively about remarks made during a recent meeting with Navy Secretary Ray Mabus regarding the base’s future.
“We’re going to continue to have this extraordinary relationship between this base and the state of Connecticut,” Malloy said at press conference following the pier event.