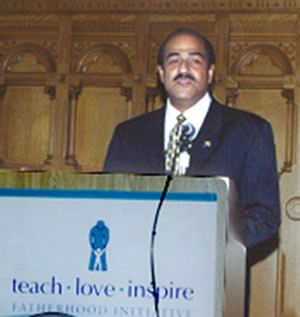 Representative John S. Martinez was the Deputy Majority Leader serving New Haven’s 95th Assembly District. He served as president of the National Hispanic Caucus of State Legislators for two years and also briefly served as the chief executive officer of the Community Action Agency of New Haven. He was especially instrumental in sponsoring Fatherhood Initiative of Connecticut legislation (P.A. 99-193), which was passed by the Legislature in 1999. John knew the importance of a father’s interaction with his child and fought to help develop public policies that would benefit the state’s fathers and their families.

On Friday, October 11, 2002, the State of Connecticut and the Fatherhood Initiative lost a “native son” when State Representative, John S. Martinez’ life was taken in a tragic automobile accident. At the time of his death, Representative Martinez was an active member and participant of the Fatherhood Advisory Council.

In 2003, honoring his memory and dedication to fathers and their families, legislation (P.A. 03-258) was passed renaming the Fatherhood Initiative after Representative Martinez. John was a very dedicated public servant who always took the time to help others. His strength of character, generosity and compassion for the oppressed is truly missed.