*Has your contact information changed? Don’t miss important news about your benefits. Please update your contact info online now! If you’re a HUSKY A, B or D member, go to www.accesshealth.ct.com and sign in to your Access Health CT User Account. If you’re a HUSKY C member, SNAP or cash assistance client, go to www.connect.ct.gov or www.mydss.ct.gov and sign in to your DSS MyAccount.

A new cross-state comparison of Medicaid, Medicare and private insurance spending, published by Health Affairs and based on federal data, shows that Connecticut's Medicaid program led the nation in controlling cost trends, when measured per enrollee during the 2010-14 reporting period.

Connecticut is reported as having reduced its per-person spending by a greater percentage (5.7%) than any other state in the country. Overall, Medicaid tracked lower nationally than both private health insurance and Medicare in the cost trend comparisons.

The comparative data is the latest available from the federal Centers for Medicare and Medicaid Services. [Please scroll down to see two-page data chart from Health Affairs' June 2017 issue.]

Commissioner Roderick L. Bremby of the Department of Social Services (DSS), administering agency for Connecticut Medicaid, said the leading cost trends can be attributed in part to various innovations in Medicaid service delivery.

"The numbers demonstrate the cost-effectiveness of Medicaid in general, and the position of Connecticut as a national leader within Medicaid," Commissioner Bremby said. "Further, the comparison to per-enrollee cost trends in Medicare and private health coverage clearly shows that Medicaid is an efficient investment of public funding in support of positive health outcomes."

Among the key factors:

· Connecticut was the first state in the country to implement early expansion of Medicaid eligibility under the Affordable Care Act. Currently, about 217,000 adults without minor children are covered in this portion of Medicaid.

· Trends in expansion states like Connecticut may have benefitted from participation by large numbers of relatively low-cost, younger individuals.

· In January 2012, as a result of an early initiative by the Malloy-Wyman Administration, Connecticut HUSKY Health (Medicaid and Children’s Health Insurance Program) entered the final stage of becoming a self-insured, managed fee-for-service program by migrating its medical services from capitated managed care to a model under which services are managed in partnership with statewide Administrative Services Organizations (ASOs).

Finally, DSS has built in 'value-based' payment strategies that initially focused on pay-for-performance (PCMH enhanced fee-for-service payments and performance and year-over-year improvement payments) and have developed to include the inaugural use of ‘upside-only’ shared savings arrangements, under which entities that achieve benchmarks on identified quality measures will share in savings that are achieved.

"As Medicaid-related policy, funding and legislative action continues at the national and state levels, it will remain important for government and stakeholders to continue to carefully evaluate the impact of policy strategies on quality, care experience and cost," Commissioner Bremby said.

The information in the below chart, which represents the latest publicly available CMS data for all states, is one important indicator of progress.

Commissioner Bremby emphasized the crucial advances represented by the Affordable Care Act (also known as Obamacare), and expressed his thanks and support to Governor Dannel P. Malloy, Lieutenant Governor Nancy Wyman and Connecticut's Congressional delegation for their active roles in fighting repeal efforts in Washington that would decimate Medicaid. 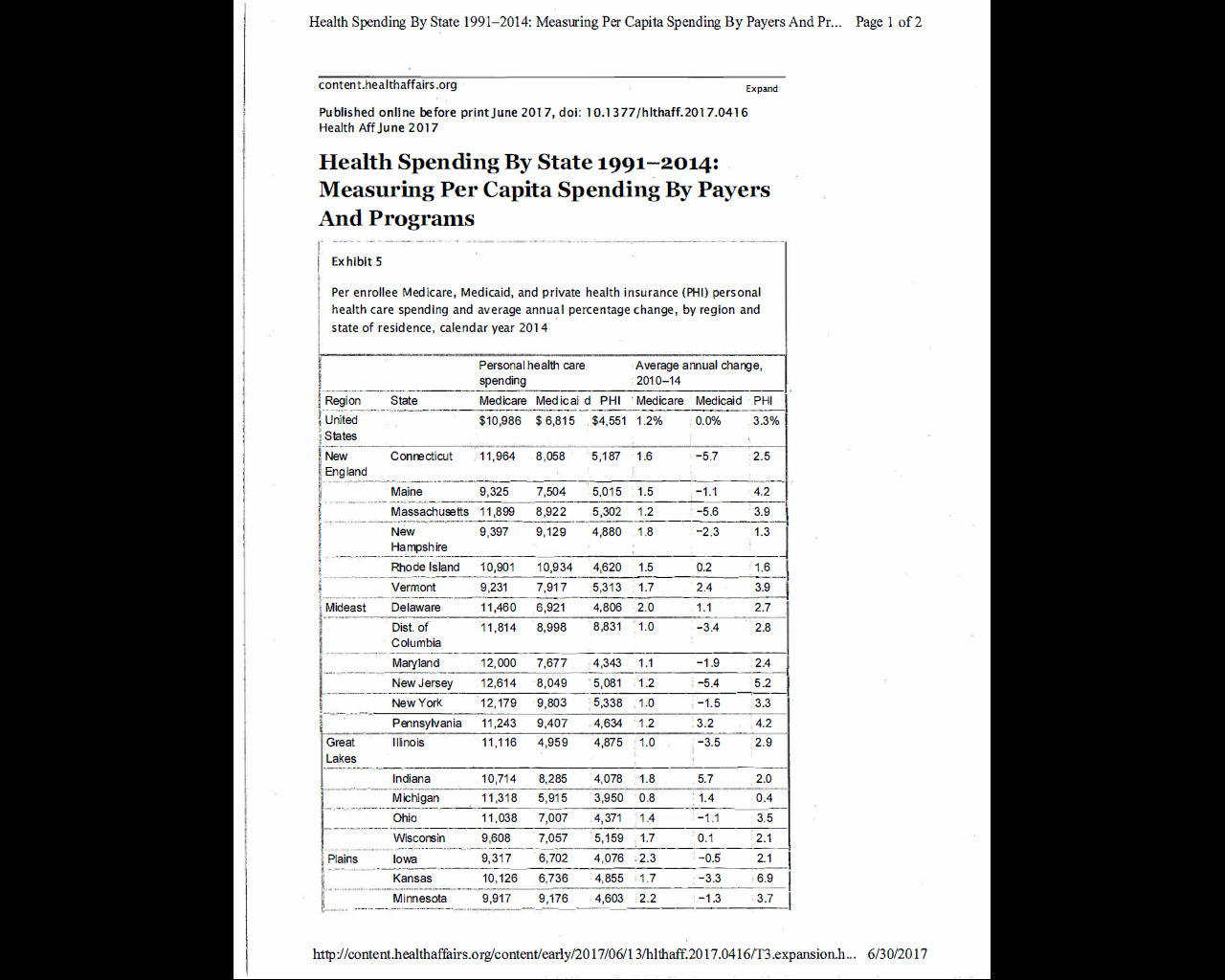 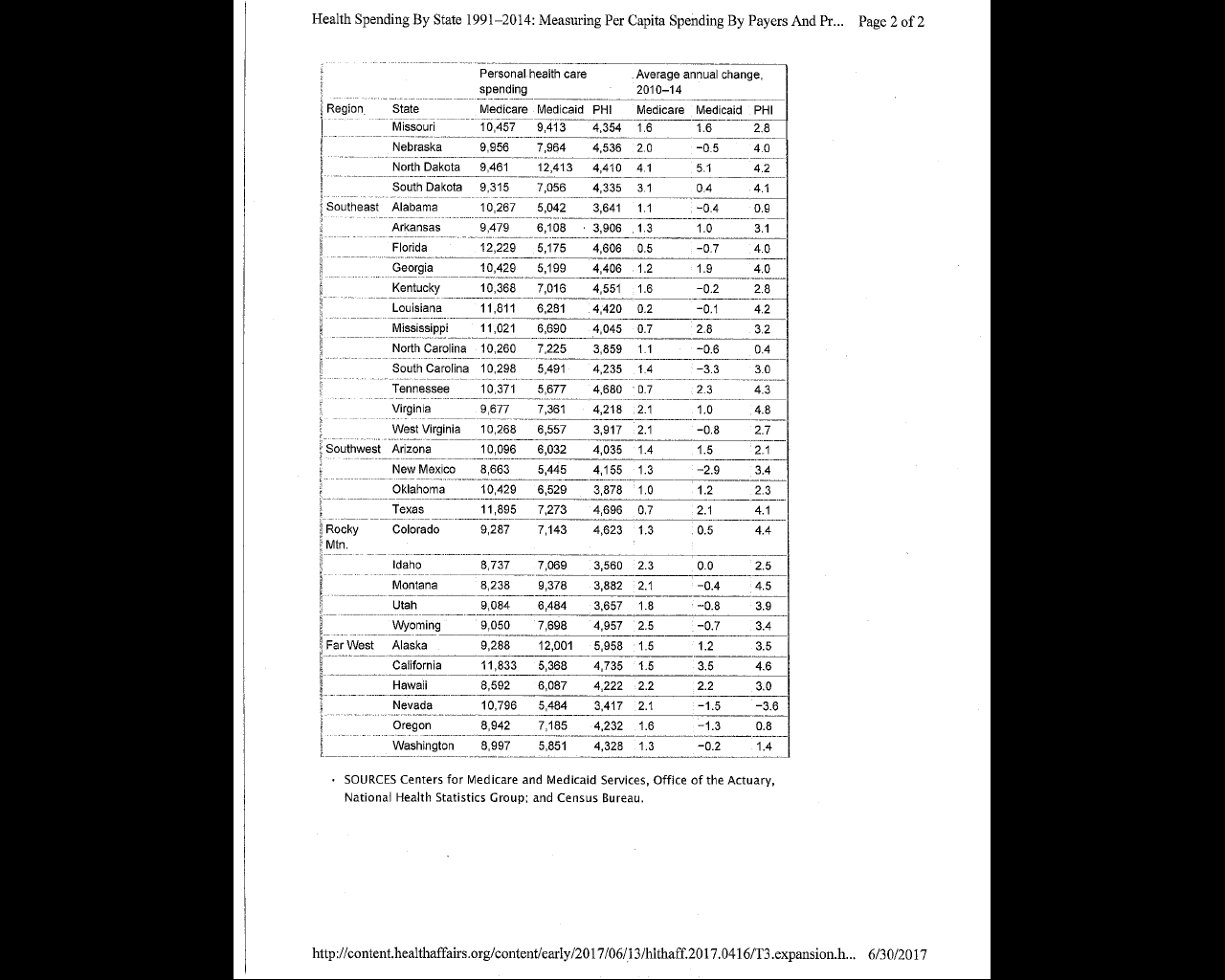 The data featured in the table comparing states is from the State Health Expenditure Accounts, produced by the CMS Office of the Actuary, a consistent and comprehensive source that allows for analysis of state-specific trends over time.