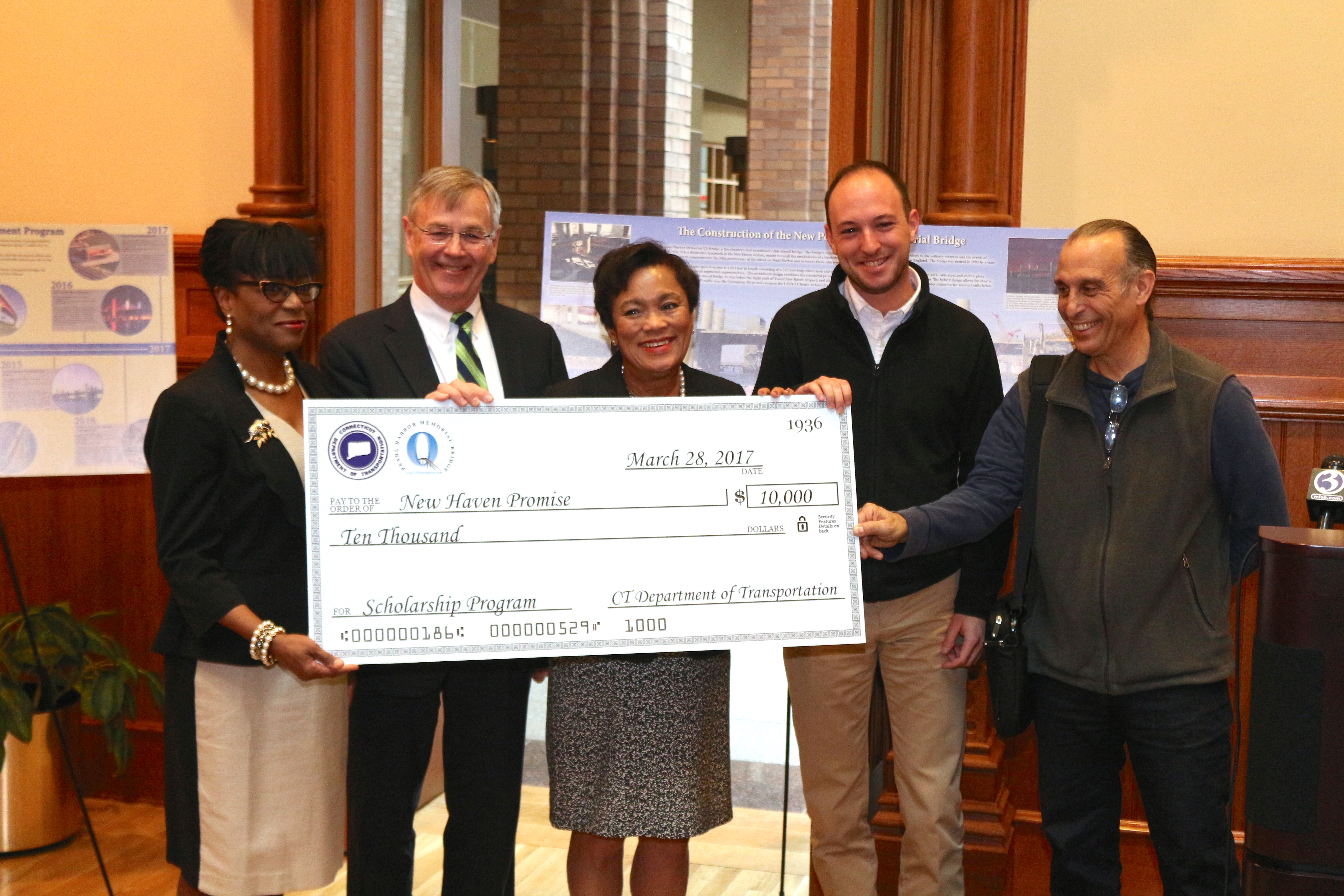 New Haven – The Connecticut Department of Transportation (CTDOT) today presented a $10,000 check to New Haven Promise, an organization providing scholarships to New Haven students pursuing degrees in the field of engineering. The $10,000 was awarded to CTDOT after it won the 2016 America’s Transportation Awards Grand Prize for the Pearl Harbor Memorial Bridge, the first extradosed bridge to be constructed in the United States, located in New Haven.

In November 2016, CTDOT was recognized by the American Association of State Highway and Transportation Officials (AASHTO), AAA and the U.S. Chamber of Commerce as the 2016 America’s Transportation Awards Grand Prize winner. With the prestigious award came a $10,000 cash prize to be donated to a charity of the agency’s choice to fund scholarships.

CTDOT selected New Haven Promise as the recipient for its commitment to providing local New Haven students with scholarships to further their education in Connecticut. The organization’s mission is to improve city schools and encourage economic development in New Haven by growing a competitive workforce.

“New Haven is rich in architectural beauty – and now more so with the DOT’s new Pearl Harbor Memorial Bridge on its skyline,” Mayor Toni N. Harp said. “Beyond that, New Haven Promise scholars are now beneficiaries of DOT prize money won for this stunning new bridge – I’m grateful to Commissioner Redeker for this generous gesture and I’m delighted about the prospects for future, home-grown engineers.”

”We are delighted to be able to share this award with New Haven Promise and the aspiring engineers they support each year,” said Commissioner Redeker at the presentation ceremony at New Haven City Hall. “We could not be more proud of the Q Bridge and the recognition it has received, and expect that this award, in the form of future scholarships, will support engineers on similar projects in the future.”

"On behalf of the New Haven Promise Board of Directors and our more than 600 college scholars, we are overjoyed that the State of Connecticut Department of Transportation elected to support the young people of the Elm City with this well-earned national award. May this gift aid scholars to follow in the footsteps of one of our program graduates — Jordy Padilla — who served as a cost engineer on the Q-Bridge project."

After nearly two decades, over 30 construction contracts and creating hundreds of jobs, the I-95 New Haven Harbor Crossing Corridor Improvement Program will be completing the final elements of the I-95/I-91/Route 34 Interchange and construction of the new Boathouse at Canal Dock through Fall 2017. The centerpiece of the program, the new Pearl Harbor Memorial Bridge that replaced one of the largest bottlenecks in the northeast, stands tall in the New Haven Harbor reminding us of the importance of rebuilding our state’s infrastructure and creating job opportunities for our graduates.