On 1/4/2011 at approximately 12:00p.m., State Police Detectives from the Statewide Narcotics Task Force and members of the Orange Police Department seized approximately 50 pounds of processed marijuana packaged for street sale in the City of New Haven.

State Police Narcotics Detectives and members of the Orange Police Department conducted an extensive criminal investigation that developed information leading to the seizure of a package of processed marijuana that was located at 355 Norton Street in New Haven.  After obtaining a Search and seizure warrant from Superior Court, State Police Narcotics Detectives searched for and seized the marijuana and a stolen firearm.

The marijuana was in the possession of the accused Jason Cox.  The accused was taken into custody without incident and transported to Union Ave. detention where he was held on bond to appear in Superior Court on 01/05/11.

CHARGES:   Possession of more than one kilogram of marijuana

Possession of marijuana with intent to sell

Possession of marijuana within 1500 feet of a school

Possession of a stolen firearm

The investigation is continuing. 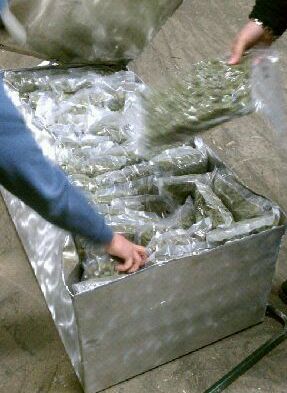