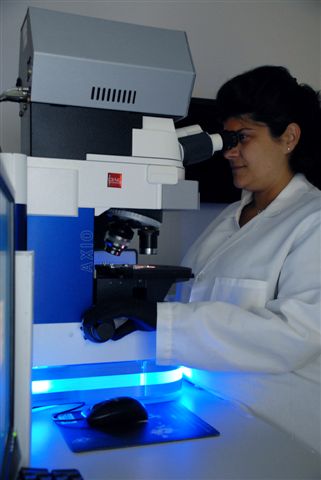 Trace evidence comes in many forms; paint, hairs, fibers, ropes, glass, soil, tape and light bulbs are the most common type of evidence that are submitted to the Forensic Laboratory. Each of these types of evidence can be used to indicate transfer from one source to another, and therefore indicate contact between individuals or objects. The trace materials collected are examined under stereomicroscopes in order to locate items of interest, for example, a paint chip or a fiber. Trace items recovered are then analyzed using scientific instrumentation and compared to known samples to look for similarities. If a known and a questioned sample show the same properties with all possible tests conducted they are reported to be similar and the known sample is considered a possible source of the questioned sample.