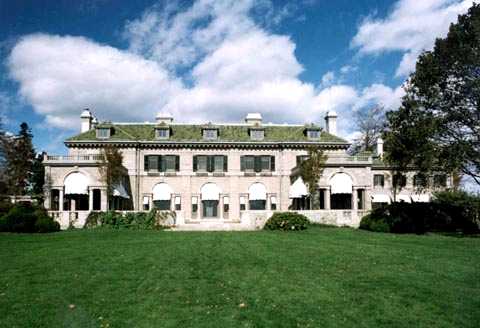 Architect Roger S. Clarke of Hartford oversaw the $3.8 million in renovations to Harkness Memorial State Park in Waterford. The restorations were performed by general contractor Thomas J. Kronenberger & Sons, Inc., of Middletown. Preservation of the historic mansion is important due to the architectural significance of the buildings and grounds.

The renovations began in November 1996 with the intent of restoring the Mansion and gardens to the conditions that existed in the early 1930's.

Extensive work was done to restore the Mansion to the conditions that existed in the early 1930's. Major renovations were made to upgrade the entire infrastructure and restore the historic character of the site.

Gardens were restored to the original planting design with shrubs, trees, perennials and annuals. The formal "Italian" West Garden was set out with symmetrical footpaths, statuary and iron fencing comparable to the designs of 1909 through 1912. The center fountain of the West Garden was rebuilt with new limestone.