Bluff Point is the only sizable mostly undeveloped public piece of coastal land left in Connecticut. The natural habitats found here include coastal woodlands, beach and dune grasslands, coastal plain ponds, coastal bluff, tidal wetlands, intertidal mud flats and offshore eelgrass beds. Because of this unique combination of habitats, a variety of plants and animals live in the area. Some of these are rare or endangered. Thus it is important to remain on trails and not disturb the plants, animals or rocks. As part of the management plan for Bluff Point, some trails will be closed in the future. Please do not use any former trails you find blocked, as habitat is trying to be protected in these areas. There are lots of trails here for hikers, joggers, horseback riders and mountain bikers.

The types of vegetation found on the point depend on geology, climatology, distance to salt water, former use of the land, current human activity, and white-tailed deer.

Coastal woodlands cover much of the peninsula. The major tree types are oak and hickory, with shrubs of blueberry and black huckleberry. Catbrier and Asiatic bittersweet have formed dense thickets in some disturbed areas. Where the soils are thicker, such as on the eastern slopes of Bluff Point, more herbaceous species occur. Here the trees are approximately 70 to 90 years old.

The open grasslands south of the old Winthrop House are dominated by switchgrass and little bluestem. These grasslands contain a variety of plants that are preferred habitat for some insects and birds. Grasslands are fast disappearing in Connecticut, so it is important to keep these and other grasslands from reverting to forest, which will occur if they are not mowed periodically.

The coastal bluffs at the southern tip of the point are affected by salt spray. Only plants that tolerate such conditions can live here. These include bayberry, sumac, Japanese honeysuckle, Asiatic bittersweet, switchgrass, beach rose and poison ivy.

The dunes behind Bushy Point beach are dominated by beach grass, much of it planted by Project Oceanology students to help stabilize the dunes. Salt-spray rose and beach pea form scattered thickets on the back side of the dune. These plants are critical for stabilizing the dunes, which prevent wind from carrying away the sand and waves from entering the marshes behind the dunes. Because of the sifting nature of sand, perennial plants are often uprooted, especially on the upper reaches of the beach. Thus many beach plants are annuals whose seeds move around during the winter to come up in a new location the next spring. They also are plants that can withstand the salt spray received from the high waves of storms. These include Russian thistle, seaside goldenrod, sea-rocket, and seaside spurge. 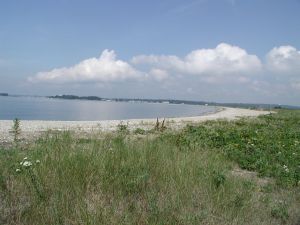 Sand is a difficult place for plants to grow and walking on the plants is likely to kill them. Please walk on the dunes only where there are boardwalks. The beach on Mumford Cove has little vegetation because of mountain bicycles. If you ride a bicycle, please do not ride on the dunes.

Behind the Bushy Point beach and extending along the trail to the beach is a large tidal wetland. Marsh makes up most of the wetland, providing a highly productive food, shelter and breeding habitat for numerous invertebrates, fish and birds. Near the mouth of the Poquonock River a saltwater intertidal flat provides a spawning and nursery area for winter flounder, as well as other finfish and shellfish. A similar intertidal flat occurs on Mumford Cove.

Bird watching has always been popular at Bluff Point because of the variety of habitats. Many shorebirds can be seen year round. The fall migration provides opportunities for seeing a large number and variety of birds. Please stay on the marked trails and use the official dune crossings.

The following bird information comes from the publication Finding Birds in Connecticut: A habitat-based guide to 450 sites, 1996, by Dave Rosgen and Gene Billings, printed by Rainbow Press, Torrington, CT, page 485.

Over 200 species have been seen at this site, including a number that are uncommon in Connecticut: gulls including Iceland, glaucous, common black-headed and black-legged kittiwake; terns including roseate, Forster's and black skimmer; gannet; 30 species of water birds; many shorebirds, including oystercatcher, Hudsonian godwit, Baird's, purple and buff-breasted sandpipers; waders, including little blue heron; raptors, including peregrine falcon, short-eared and saw-wet owls; other landbirds, including both cuckoos, bobwhite, Swainson's and gray-cheeked thrushes, white-eyed and Philadelphia vireos, golden-winged, Nashville, Blackburnian, bay-breasted, blackpoll, orange-crowned and mourning warblers, chat, and a variety of sparrows. Many of these uncommon species occur in migration, when Bluff Point acts as a landfall in the spring and a land trap in the fall. The result is that it attracts a wide species diversity and big numbers of individual birds. In the fall, the rock outcrop at the southern end of the peninsula is an excellent spot from which to watch the hawk migration. The little neck of woods just east of the driveway and immediately south of the railroad tracks can be exciting during the fall migration. There is a great diversity of nesting species, thanks to the variety of habitat types near one another. Among the more interesting nesting species are clapper rail, black-crowned night heron, osprey, orchard oriole, white-eyed vireo and bobwhite. Bluff Point is also a good place to see oystercatcher during the nesting season, afterwards during their post-breeding congregation, and finally as the fall migrants pass through. Winter is also exciting. From the southern portions of Bluff Point you may see: (on Long Island Sound) common and red-throated loons, red-necked and horned grebes, all three scoters, old squaw; (in the coves and estuary) bufflehead, common goldeneye, canvasback, red-breasted merganser; (on the beach or over the marshes) rough-legged hawk, short-eared owl; (on the beach or at the nearby airfield) horned lark and snow bunting.

Connecticut Birding Guide, 1996, by Buzz Devine and Dwight G. Smith, published by Thomson-Shore, Inc. additionally lists the following birds to be seen at Bluff Point. In the clearings and thickets near the railroad tracks during September and October, various warblers such as those mentioned above plus Tennessee, Cape May, Wilson's, and some more common warblers may be found. Mid to late October large numbers of white-throated, song, swamp, and Savannah sparrows pass through this area. Some rarer species sometimes found here include dickcissel, blue grosbeak, and white-crowned, Lincoln's fox and clay-colored sparrows.

Along the loop trail watch for various shore birds in the river, mudflats and salt marsh. In spring, summer and early fall you may see killdeer, semipalmated and black-bellied plovers, ruddy turnstone, greater and lesser yellowlegs, spotted, least and semipalmated sandpipers, snowy and great egrets, great blue and green herons. In the tangles of vines along the trail watch for Carolina wren, house wren, gray catbird, brown thrasher, common yellowthroat, northern cardinal, eastern towhee and others.

The beach area attracts some of the same shorebirds already mentioned, plus sanderling, dunlin, short-billed dowitcher, American golden-plover, buff-breasted sandpiper, as well as common and least terns. In the fall American pipits are common and in the winter the Ipswich race of the savannah sparrow is sometimes seen, as well as an occasional snowy owl.

Various grebes, cormorants, gulls and ducks are often seen from the bluff, during fall through spring.

The park does not contain any uncommon non-flying vertebrates. Because of the isolation of the peninsula, white-tailed deer became a problem in the past. Their numbers became so great the vegetation was heavily impacted and starvation of deer became common. By 1995 the Department of Environmental Protection determined the population must be reduced and a series of controlled hunts were used to reduce the herd to the estimated carrying capacity of the area.

Other mammals found in the area include rabbits, raccoons, opossums, coyotes, and fox.

A vernal pool at the base of the peninsula's east slope is probably breeding habitat for various amphibians, but a survey has been not been done to determine which species use the pool. 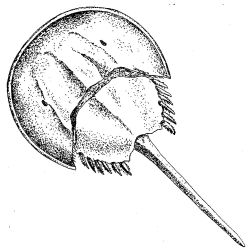 Offshore, and sometimes on the beach or in tidal pools, a variety of crustaceans are sometimes seen, either alive or dead. Crabs include green, blue, hermit, spider, fiddler and sand. Many of these are being displaced by the Japanese shore crab.

The horseshoe crab, actually an arthropod, makes its home around the shore and marshes. Various snails and insects also inhabit the beach and salt marsh. Clams and mussels bury themselves in the mud flat along the Poquonock River. A variety of shells wash up on the beach. A guide to shells can help

Plants of the Salt Marsh

A comprehensive study of the salt marsh has not been done. The drawing below is a typical cross section of a Long Island Sound salt marsh and the marshes in the Bluff Point area are probably similar. This illustration is from Living Treasures: The plants and animals of Long Island Sound, by Lisa Wahle and Nancy Balcom, 3rd ed, 2002. The booklet is available from the Connecticut Sea Grant College Program, www.seagrant.uconn.edu. 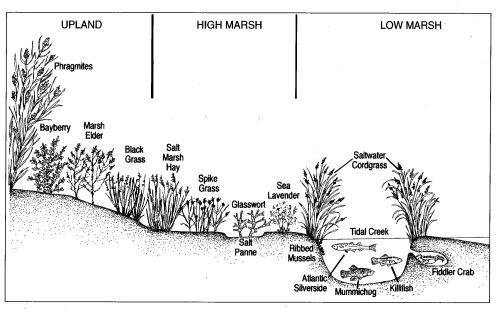 Cross section of a typical salt marsh. Drawing by Susan Stone from Living Treasures: The plants and animals of Long Island Sound.