Shenipsit State Forest began in 1927 with the purchase of land at the summit of Soapstone Mountain in Somers to erect a fire tower to keep a lookout over the forests of the eastern woodlands. Over time, additional acreage was purchased to form the sprawling 7,078 acres state forest we have today in Ellington, Somers and Stafford.

Shenipsit is dominated by nearly pure stands of oak, particularly red oak, as a result of repeated clear-cutting for charcoal production and as a result of fire.  All of this occurred prior to State ownership. Oak reproduction favors the open, full-sunlight conditions created by clear-cutting and by fire. Additionally oak seedlings and saplings almost always re-sprout from the root collar and grow vigorously after the above-ground part of the tree has been killed. Oak trees produce valuable timber as well as important wildlife food – acorns are an important source of nutrition for deer, turkey, squirrels and other wildlife.

There is an abundance of recreation opportunities at Shenipsit State Forest. The two primary attractions are the wonderful hiking along the Blue-Blazed Shenipsit Trail which passes over Soapstone Mountain and the amazing views from the Soapstone Mountain observation tower. While the original fire tower is long gone, today’s tower stands specifically for the public’s recreational viewing. As one of only two observation towers in Eastern Connecticut (the other being the monument at Fort Griswold State Park in Groton), the vistas afforded from this vantage point are spectacular as visitors can take in scenes from the Connecticut River Valley to the Springfield skyline.

Shenipsit is also home to Connecticut’s museum of the Civilian Conservation Corps (CCC). The CCC was President Franklin D. Roosevelt’s solution to the need for environmental conservation work and the large number of unemployed young men during the Great Depression until 1941, our entry into World War II. The "CCC Boys", mostly ages 17 to 24, lived in military style camps and were paid $1 a day to work in what are now the state and national forest and park systems.

In 1935 CCC Camp Conner was established at the present site of the Shenipsit Forest Headquarters and CCC Museum. The Museum is located in the only remaining CCC barracks building in the State and pays homage to the dedicated men who worked in Connecticut camps. The museum features a large collection of tools, equipment, photographs, and memorabilia from the former "Camp Conner" and 21 other camps in the State. 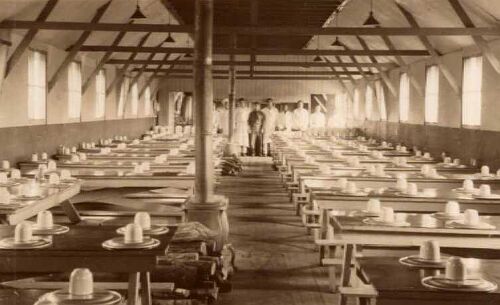 n Connecticut camps the "CCC Boys" were responsible for the creation and maintenance of many of our state parks and forests including: Hammonasset Beach, Chatfield Hollow, Squantz Pond, and Southford Falls state parks, and Pachaug, Cockaponset, and many more state forests. They constructed buildings, forest roads, and recreation areas, planted trees, and fought forest fires in every state in the United States.

A short descriptive and pictorial tour guide to the CCC Museum is available for viewing or download as a PDF document.