Nehantic was the first state forest in New London County, and has all been purchased since 1925. Considerable difficulty was experienced in selecting the site. Although there is a great deal of wooded land in the county, it is so cut up by open farm lands that large areas of forest in one block are difficult to find. The land is mostly covered with a second growth of hardwoods. There are a number of good trout streams in the forest.

The forest takes its name from the Nehantic Indians, whose ranging grounds once extended from Wecapaug Brook, in what is now Rhode Island, to the Connecticut River. Shortly before the settlers arrived the Pequots had invaded Nehantic territory and annexed about half of the land claimed by the tribe.

A 16 acre forest stand has been intentionally burned repeatedly to simulate the structure of the forests of Southern Connecticut just prior to European settlement. Native Americans often burned much of the forest in order to make the forest more habitable. The burns increased grasses which attracted their game animals, increased berry production, and facilitated the collection of firewood and acorns as well as numerous other benefits. The burn area is more open than adjacent forests as the fire killed much of the thin bark trees in the understory as well as the occasional overstory tree. The stand is located near the main entrance to the forest off Route 156 just south of the village of Hamburg. 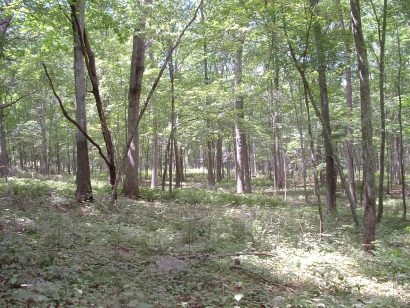 This picture was taken just over a year after the latest of a series of burns. The burns knocked back the dense under and mid-story that is prevalent in most hardwood forests in Connecticut allowing greater visual penetration. The forest still has more overstory trees than were present in pre-settlement times as the site is not very dry and it is hard to get an intense enough fire to kill more than a handful of the bigger trees. The burns promoted a grassy and herbaceous forest floor that is not common in Connecticut, except on some ridge tops . The lack of fire has allowed a woody understory to develop and shade out the grasses.