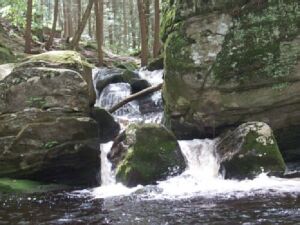 Enders State Forest began as a 1,500 acre gift to the people of the state of Connecticut by the Enders family in memory of John Ostrom Enders and Harriet Whitmore Enders by their four children. It became Connecticut’s 29th state forest when it was officially transferred to the state on April 2, 1970. The property has been added to continuously as opportunities have presented themselves over the years so that the forest is now nearly 2,100 acres in size.


As per the wishes of the Enders family and terms of the original deed, their gifted land did then, and continues to, carry a hunting restriction. The forest abuts the remarkable 4,200 acre McLean Game Refuge which former Connecticut Governor and U.S. Senator George P. McLean established in his will after death in 1932.

Enders State Forest varies in topography from a high of just over 1,100 feet above sea level in its northern most sections to a low of around 900 feet at the wetlands on its western side. These wetlands combine with the hilly terrain to give rise to many streams which flow generally eastward to the west branch of the Salmon River. The full tree canopy over the trails frequently yields damp and sometimes slippery conditions of the forest floor and trails.

It is these streams, combined with the forest’s hilliness and bedrock outcrops, which offer a variety of cascades, low water falls and plunge pools. A trail marked with purple colored blazes will lead hikers to a view of the waterfalls. The path is approximately three quarters of a mile long.

The forest is managed for sawtimber, firewood, wildlife habitat, and recreational activities such as hiking, fishing, and bird watching. Some hunting is allowed in the newer, purchased acquisitions at the northeastern side of the forest. The DEEP hunting area map website depicts the areas where hunting is allowed. Hunting information may also be obtained from the DEEP’s Hunting and Trapping Guide in the Public Hunting Area Map section.