Henry Buck Trail (Blue blazed): Starts at the old bridge site on West River Road 2.5 miles north of Pleasant Valley. The trail leads up through the forest to the ruins of an old cheese box mill, climbs the Tremendous Cliffs which offer a good overlook, and continues down the north slope to about .3 miles north of the starting point.

Agnes Bowen Trail (Orange): Starts at the Museum and proceeds north to the James Stocking Recreation Area, crossing the Pack Trail near Beaver Brook, to Beaver Swamp; follows Beaver Brook Road for several hundred feet, proceeding westerly to a crossing of Greenwoods Road, and southerly to East River Road, about a mile north of the starting point. The trail is a traditional 1930's ski trail. Distance - 2.5 miles.

Elliott Bronson Trail (Red): Starts at Greenwoods Road near the Museum, runs through the southern portion of the forest crossing a 60' cliff; offers a rugged climb over Ragged Mountain; terminates on a town road near Route 181. Distance - 1.5 miles.

Jessie Gerard Trail (Yellow): Starts at East River Road near the old Indian Settlement known as Barkhamsted Lighthouse. The right trail fork goes through the lighthouse site and continues northerly to the Chaugham Lookouts. The left trail fork climbs more directly to the overlooks by 299 stone steps. The views from this area are some of the best in the state. Continuing north, the trail passes between the Veeder Boulders to the picnic area on Greenwoods Road. Distance - 1.3 miles.

PondTrail (Green): This short trail was created in the summer of 2012 and leads to the southern end of the Beaver Brook Meadow. Birds and other pond life may be observed from here. To reach this trail, start at the southernmost Charles Pack trailhead on Greenwoods Road, go over the wooden bridge that crosses Beaver Brook, take an immediate left and follow the green markers. This trail is about one tenth of a mile long and does not loop. 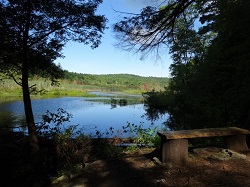 Robert Ross Trail (Blue):Starts at the end of Warner Road, runs westerly to the Jessie Gerard Trail; and then southerly along the west side of the ridge, to the end of King Road; proceeds to the Museum and westerly to East River Road. Distance - 2 miles.

Walt Landgraf (Red):This trail starts near the east end of the Elliot Bronson Trail and leads to an area of rock ledges known as the Indian Caves. For 1500 years soapstone was quarried here by Native Americans. Distance -.2 miles.