LISTOS Study of Ozone Chemistry Around Long Island Sound
To investigate the evolving nature of ozone formation and transport in the New York City (NYC) region and downwind, NESCAUM launched the Long Island Sound Tropospheric Ozone Study (LISTOS). Initial aircraft studies began in May 2017, with expanded activities during the summer of 2018. LISTOS involved a large group of researchers with state and federal agencies and academia that brought a diverse set of resources, expertise, and instrumentation skills. These included satellite, aircraft, balloon (ozonesondes), marine, and ground-based data collection and analysis methods to probe the New York City pollution plume and its evolution over and around Long Island Sound (LIS). The following image shows the study area around LIS with a schematic of the various flights and instrumentation locations (compliments of NASA). 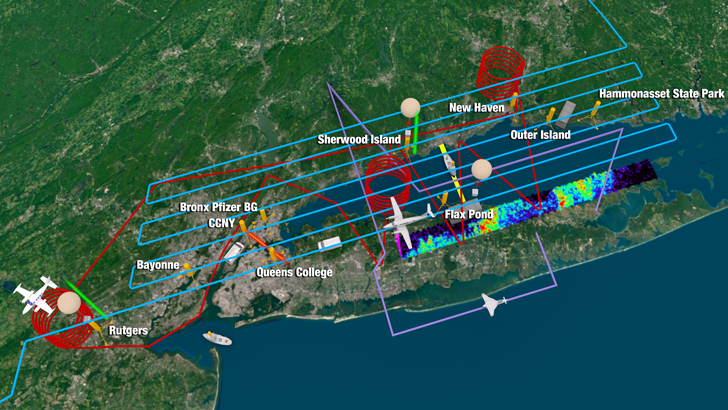 August 28, 2018 Ozone Event
The ozone forecast for August 28, 2018, predicted exceedances along coastal Connecticut. As part of the LISTOS program, NASA conducted flights on this day to measure nitrogen dioxide (NO2) levels in the NYC metropolitan and LIS area that likely contributed to ozone formation. The following image shows the NO2 plumes that were detected, superimposed with locations of a selection of point source electrical generating units (EGUs).
Link to larger version of above image (PDF)
The following image is a map of the ozone AQI levels that were monitored on August 28, 2018. Note the general southwest to northeast orientation of the orange (unhealthy for sensitive groups) ozone levels exceeding the standard, originating from the NYC area and stretching to Cape Cod, MA.. 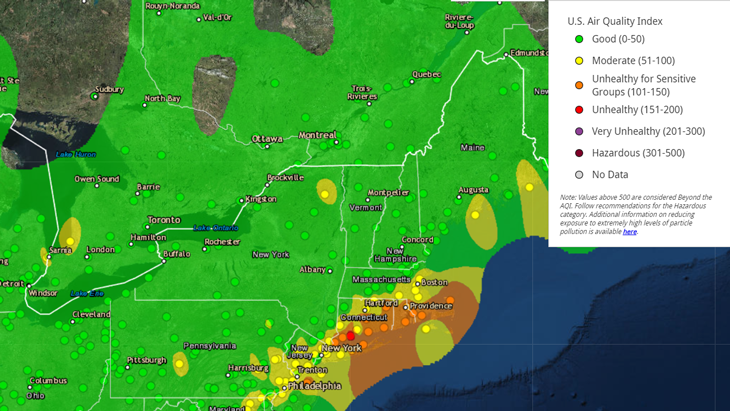