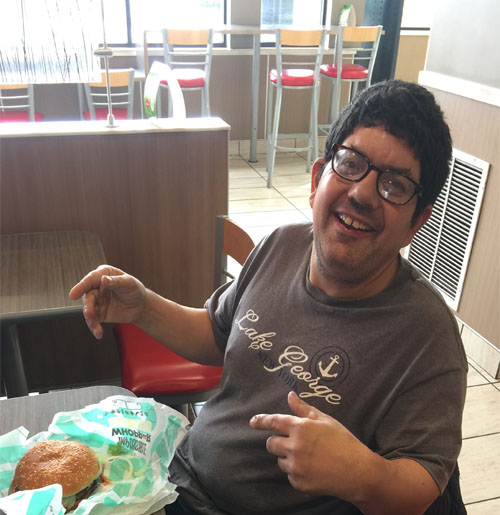 When a fast food restaurant announced the latest change in their burger line-up, many people took notice.

Doug Novitski is a man with a passion for a good time and for trying whatever is the new-now-next to come along. When he noticed the hamburger giant was offering a new 100% plant-based burger, he sent out an invitation to his group of friends and staff for a taste test.

“I told my friends they better try it,” and then decided to make a party out of it, declared Doug, in-between mouthfuls of the new plant-based burger.  He got together a group for a luncheon field trip to the restaurant to taste the latest offering.

“I like to eat healthy. I like to try new things,” said the 46-year-old with a taste-affirming smile. “It tastes like a regular burger. It’s good.”

Doug said he saw the chain restaurant’s advertisement on TV and wanted to share it with his friends and staff. “I knew people who needed to know about the burger.”

Doug has several staff who are vegetarian and has eaten at vegan restaurants. Being exposed to healthy meals has made him aware of his food choices. He has been a bagger at Stop & Shop in Seymour for 21 years and has just recently been focusing on more vegetarian products while bagging.

Doug’s staff, Michelle Niemotko, said that Doug has really become aware of what eating healthier means. When he was exposed to the vegan restaurant during a field trip to Sail Fest in New London in the summer of 2019, that is when the plant-based movement caught his attention.

“That really opened his eyes,” said Michelle, about the vegan experience. Michelle has worked with Doug for over five years and confirms that he wants to live a healthier lifestyle. “Doug prides himself on his independence and advocating for others.”

Michelle said he is now telling his father, who usually buys the groceries, and the other staff that work with him, that he likes cooking veggie burgers at home.

“I want to live a long time,” said Doug, who always seems to have a smile. “I know that I have to eat healthy and not eat crap if I want to live to 100.”

Doug is living proof that you are never too old to learn something new. 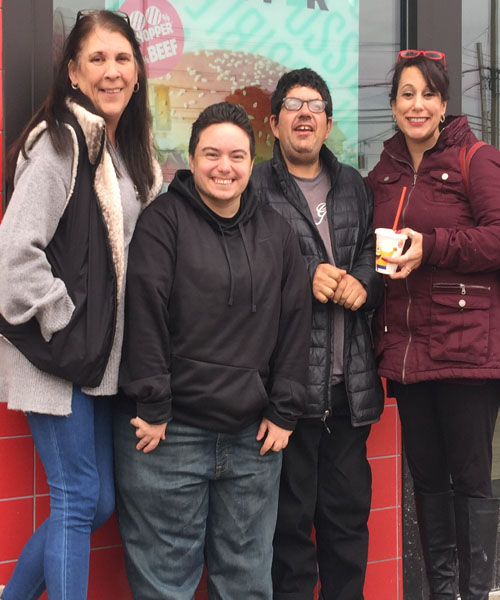 Doug Novitski and his friend Jamie Reiff, with staff Elizabeth Diaz and
Michelle Niemotko enjoyed a taste test a new plant-based burger at a chain restaurant.