HARTFORD, October 9 -- The Department of Consumer Protection reminds consumers and store owners that drop-side cribs are considered unsafe and have been banned for sale or resale nationwide since 2011. A recent product safety inspection of licensed thrift stores found one Meriden store with four used drop-down cribs for sale. These were immediately removed and destroyed. 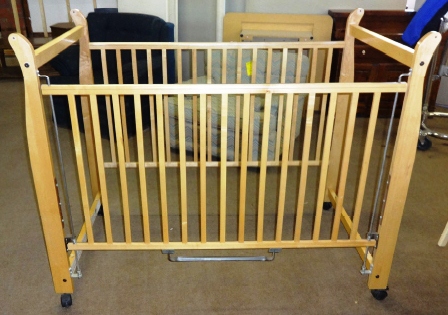 “Before enacting its total ban, the Consumer Product Safety Commission (CPSC) recalled more than 7 million drop-side cribs from different manufacturers due to suffocation and strangulation hazards,” Consumer Protection Commissioner William M. Rubenstein said. “From 2000 to 2009, CPSC documented that at least 32 infants and toddlers died by suffocation or strangulation in drop side cribs, and another 14 deaths were suspected to be related to entrapment in a drop side crib. Hundreds of injuries, many serious, were also reported,” he said. 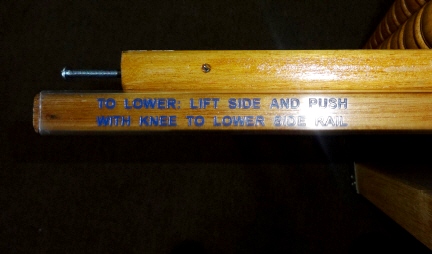 Drop-side hardware is prone to break and experience other problems during normal use, causing the side to detach from the crib. Infants and toddlers can then become entrapped or wedged between the crib mattress and the drop side and suffocate. Infants can also strangle in the “V” shape formed by a drop side that detaches in an upper corner. 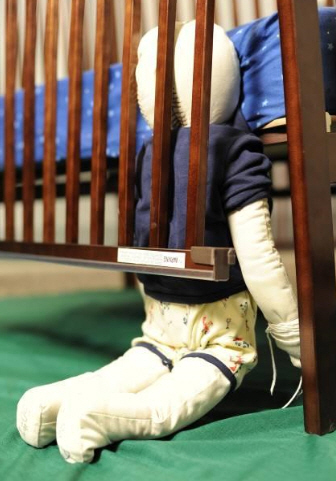 A recent CPSC study found that an estimated 69 percent of thrift stores were selling at least one type of hazardous consumer product. Many of these were children's products.

“It’s critically important before buying items at tag sales and second hand stores, that consumers educate themselves about whether or not there have been safety concerns related to the items,” Rubenstein said.

Here are some tips for thrift store shoppers:

Make sure cribs meet current national safety standards (no drop side cribs) and are in good condition. Look for a certification seal.

Crib mattresses should fit snugly. If it doesn't, infants can become entrapped and suffocate.
On children’s clothing, be sure there are no drawstrings around the hood and neck. Drawstrings at the waist should not extend more than 3 inches. Drawstrings can catch on playground and other equipment, and can strangle young children.
For playpens and play yards, verify that the item you might buy has not been recalled. Recalled products include play yards with protruding hardware or rotating top rails that don't properly lock into place. Children can strangle if pacifier strings or clothing become entangled on protruding hardware. Children can be entrapped by folding play yards that collapse.
If buying a car seat carrier, check to make sure the model you are buying has not been recalled. Car seat carrier handle locks on recalled models can unexpectedly release when used as a carrier outside of a car. Infants can fall forward and strike the ground if the handle disengages.
On bunk beds, make sure all spaces between the guardrail and bed frame and all spaces in the bed headboard and foot boards of the top bunk are less than 3 1/2 inches. Make sure there are guardrails on both sides of the top bunk. Children can become entrapped and strangle in the bed's structure or wedged between the bed and a wall and suffocate.
Millions of hazardous toy basketball nets have been recalled. Check before you buy. Children can strangle on loops or openings in these basketball nets if the nets come unhooked from the rim or have knots that slide. If children put their heads into these openings, the nets can get tangled around their necks. Toy basketball nets can present a strangulation hazard to children.
Do not buy older accordion-style child safety gates. Make sure that newer style child safety gates are used to keep children away from potentially dangerous areas, especially stairs. Older child safety gates that do not meet current safety standards can present strangulation and other hazards to young children.
Bean bag chairs with zippers that can be opened are extremely dangerous for young children. CPSC has recalled more than 12 million bean bag chairs. Young children can unzip the chairs and choke or suffocate on the small pellets of foam filling.

The Department of Consumer Protection works to educate thrift shop owners about their  responsibilities regarding the sale of used products, and recommends The Resellers Guide to Selling Safer Products to shop owners, tag sale fans and anyone interested in learning more about selling and buying resale items.  The agency will continue conducting statewide retail inspections with help from United States Consumer Product Safety Commission inspectors.

For more information about hazardous products, visit www.cpsc.gov and www.recalls.gov