The notices, including one addressed from the “Intl. Lotto Commission” of Madrid Spain and another from “La Primitiva Int’l. Loteria,” also of Madrid, both claim that the recipients are winners in the “Spanish Sweepstake Lottery/International Program.”

“These mailings are identical to the scam emails that promise people huge prizes or lump sum payments,” Rubenstein said. “We want consumers to throw the letters out, and not respond to them in any way.”

Rubenstein said that consumers need to keep in mind that no matter how it’s presented, if something sounds too good to be true, it’s not true.

“Whenever great prizes, trips, or large sums of cash are supposedly being given away, there’s always a catch, and that catch requires you to pay money or give bank account information in order to get the prize,” Rubenstein said.  “As people here and across the country unfortunately learn, there is no prize – it’s another scam playing on people’s hopes and innocence.”

Lottery or sweepstakes scams typically notify victims about a great cash prize which can be claimed only after the “winner” pays some transfer fees or taxes, provides some proof of identity, or gives bank account information.  Sometimes a check is actually sent as part of the winning notice, and the victim is told to deposit it into his or her bank account and return some amount to cover the associated fees and taxes. These prize checks ultimately bounce, but the victim’s “payment” is gone forever – drawn from their own bank account.

Scammers acquire names, addresses, phone numbers and email addresses of potential victims via spyware and other tools, and through various trade journals, business directories, print advertisements, Chambers of Commerce -- anywhere that information appears on the Internet or in print.  Common signs of a scam include:

“Remember, a legitimate lottery or sweepstakes does not require you to pay fees to collect your prize, and taxes are due only AFTER you receive the winnings,” Rubenstein said. “Don’t take the bait.” 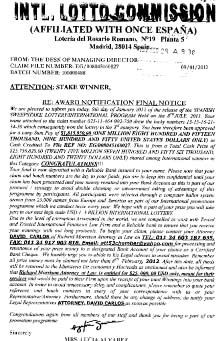 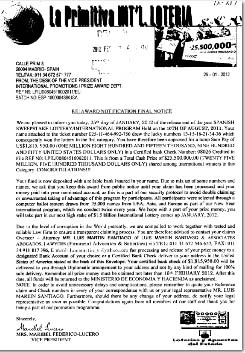