Powdery mildew, Phyllactinia.
A whitish powdery growth is first evident on the undersides of the leaves and eventually spreads to the entire leaf. This usually occurs in mid- to late summer and although some defoliation can occur, it is usually not considered a serious problem.

The impact of this disease on the overall health of the tree is minimal since it is more aesthetic than life-threatening. Steps that maintain plant vigor are helpful to counteract premature defoliation. Raking and removing fallen leaves also minimizes the amount of overwintering inoculum. Although not usually necessary, control can also be achieved with the use of fungicide sprays applied when symptoms first appear. Several applications may be necessary. Among the compounds registered for use in Connecticut are neem oil, copper hydroxide, thiophanate methyl, and sulfur. Consult the label for dosage rates and safety precautions.

Bacterial blight, Pseudomonas spp.
Irregular, water-soaked, dark green sunken spots develop on leaves. These become brown or black with yellow borders and translucent edges as they age. Young leaves may be deformed and browned. On young shoots infection shows as water-soaked streaks which can eventually kill the twig. Yellow or white masses of bacteria may ooze from lenticels or from cut symptomatic stems under moist conditions.

Pruning and removing infected parts back to healthy wood can reduce the chance of further infection. All pruning tools should be carefully disinfested with 10% bleach or 70% alcohol between cuts. Sound cultural practices that optimize plant vigor will help with recovery. 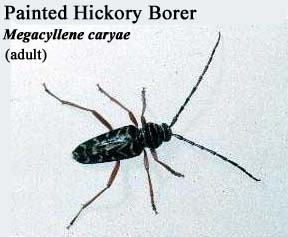 Hickory borer, Megacyllene caryae. The larva of this beetle tunnels under the bark and in the sapwood of hickory and mulberry. The beetles emerge in May and June and there is one annual generation. The beetle is about 3/4" long, blackish with yellow markings. There are three narrow cross-bands on the thorax, a W-shaped mark across the wing covers near their base, and several other wavy cross-marks. Eggs are laid in crevices or under the edges of the bark and the young larvae tunnel partly in the bark and partly in the wood. Larvae become mature in 10 to 12 weeks, pupate in the wood in September and overwinter there.
This insect seldom injures healthy trees, so maintain adequate irrigation to trees. Cutting and burning infested trees and all slash, if allowed, is the usual measure of control. 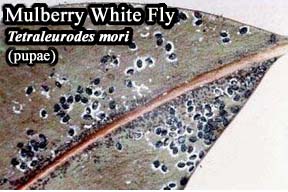 Mulberry whitefly, Tetraleurodes mori.
This whitefly was named from the mulberry, presumably because mulberry leaves are commonly infested and a favorite host, although the insect occurs on many other kinds of trees and shrubs. The oval nymphs or larvae occur on the undersides of the leaves, and are dark brown or black, fringed with marginal white wax. The wings of the adult are white, spotted with red and brownish black. Usually, control measures are not employed. If the tree is used for ornamental purposes, imidacloprid, which is registered for use against this pest in Connecticut, can be applied to the soil as a systemic. Consult the label for dosage rates and safety precautions.