Plant Health Problems
Herbs belong to many different plant families and can be susceptible to many types of diseases. There are diseases specific to some herbs, like Fusarium wilt of basil, and there are other diseases that are common to many herbs such as powdery mildew. Some common diseases that occur on many herbs include the following.

Control can be achieved by using sterile potting media, clean pots, and fungicide-treated seed. If seedlings in a seed tray become symptomatic, discard all of the seedlings since asymptomatic seedlings may also be infected.

Root and crown rot, Rhizoctonia solani, Pythium spp., Fusarium spp.
Symptoms appear as wilting and a slow or rapid collapse of the plant. The roots can appear brown and water-soaked instead of white. A water-soaked lesion can often appear at the base of the stem.

Control can be achieved by using sterile potting media, clean pots, and fungicide-treated seed. Affected plants should be rogued out and discarded.

Botrytis blight, Botrytis cinerea.
Botrytis blight occurs on many different kinds of herbs. The disease appears when plants are grown under conditions of high humidity, such as in a terrarium. The disease appears as tan to brown spots on leaves that can be associated with a grayish mold colonizing the damaged area. Senescing flowers are particularly susceptible and frequently have papery spots on them.

Botrytis blight can be suppressed by avoiding overhead irrigation and watering in the morning to allow time for leaves and flowers to dry. Proper plant spacing can improve air drainage and rapid leaf drying. Control can also be achieved with the use of fungicide sprays applied as soon as symptoms are visible. Among the compounds registered for use on some herbs in Connecticut are neem oil, potassium bicarbonate, and thiophanate-methyl. Consult the label for host, dosage rates, safety precautions, and indoor use.

Powdery mildew, Oidium spp.
The disease affects many types of plants. White, powdery patches appear on the upper and lower surfaces of the leaves. These patches eventually coalesce and can cause leaf browning.

Proper plant spacing can improve air drainage and rapid leaf drying. The disease can be minimized by cutting off and discarding the diseased foliage as soon as the symptoms are evident. Control can also be achieved with the use of fungicide sprays applied as soon as symptoms are visible. Among the compounds registered for use on some herbs in Connecticut are potassium bicarbonate, neem oil, horticultural oil, thiophanate-methyl, and sulfur. Consult the label for host, dosage rates, safety precautions, and indoor use.

Foliar nematodes, Aphelenchoides spp.
Patches can appear on the leaf and appear light or dark brown. The disease is caused by microscopic worms called nematodes that tunnel in the leaf.

Affected leaves should be cut off and discarded. Avoid splashing water from leaf to leaf. The nematodes can live as saprophytes in soil or potting mix for a short time so replanting the plant into fresh soil mix at the time the leaves are picked off can increase the control.

Cold water injury, cold water used for watering.
When herbs are grown indoors, irregular or ring-like pale tan spots appear on the upper side of the leaves. These may vary greatly in size and severity since some cultivars are more sensitive than others. Injury occurs when water which is colder than the surface of the leaf is used for watering. Symptoms are often more pronounced during the winter months.

This problem can be avoided by watering with tepid or room-temperature water and by not wetting the foliage during watering.

Soluble salts can sometimes be leached from the potting mix by running a stream of water through the soil for approximately 20 minutes. However, when salt levels are excessive, the plant can be repotted into fresh sterile potting mix and a clean pot. It is also important to avoid excessive use of fertilizer during periods of slow growth.

Aphids.
These are soft bodied, pear-shaped insects, from 1/12" to 1/4" (2-6 mm) long, whose identifying characteristic is the presence of cornicles, that look like tailpipes, on the top rear of the body. Antennae are usually shorter than or equal to the body in length. Winged forms may be produced when food is getting scarce or when the aphid needs to get to an alternate host to overwinter. They have piercing-sucking mouthparts and excrete honeydew, which supports black sooty mold. Aphids may be tended by ants who feed on the honeydew. The green peach aphid and other aphids often infest herbs. Aphids have many natural enemies, including ladybeetles, syrphid flies, predatory midges, and tiny parasitoid wasps. This complex of beneficial insects helps keep aphid populations under control. If needed, aphids may be controlled by spraying with insecticidal soap, ultrafine horticultural oil or azadirachtin which are among the compounds registered for use against this pest in Connecticut. These products will conserve the natural enemies. Repeat applications may be necessary. Consult the labels for dosage rates, safety precautions, and preharvest intervals.

Asiatic garden and Japanese beetle, Maladera castanea and Popillia japonica.
See Lawns for a description and the life cycle of these two beetles. Feeding on the foliage of herbs can be controlled by applying malathion, rotenone or azadirachtin, which are among the compounds registered for control of this pest in Connecticut, when adults are present. Treatment of lawn areas should reduce the general population of these beetles. Consult the labels for dosage rates, safety precautions, and preharvest intervals.

Corn earworm, Helicoverpa zea.
Also called the tomato fruitworm, this striped caterpillar attacks the leaves, flowers and buds of many herbs. They grow to about 2" long and vary greatly in color. They may be brown, tan, green, or pink with light and dark longitudinal stripes. The head is golden brown and the body has small bumps and spines, giving it a rough texture. There can be two or three generations in a year, depending on when the adults arrive on winds from the south. The adults are moths, so Bacillus thuringiensis var. kurstaki, or Bt var. aizawai, which are among the compounds registered for control of this pest in Connecticut, can be applied to small caterpillars when needed. Consult the labels for dosage rates, safety precautions, and preharvest intervals. 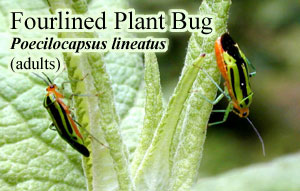 Fourlined plant bug, Poecilocapsus lineatus.
This greenish insect attacks many herbs. This bug lays eggs in the soft stems. They hatch about the middle of May and the young bugs suck the sap from the tender leaves. They molt five times and when mature, about the middle of June, they have wings and are nearly 1/3" long. The insect body is yellow, marked lengthwise on the wings with four black stripes alternating with three green stripes. The injury to the leaves consists of sunken areas around the punctures. These areas later appear as circular transparent spots and finally as circular holes. This insect injures the new leaves of many different kinds of annual and perennial plants and shrubs. There is one generation each year. The nymphs can be managed by spraying with azadirachtin, ultrafine horticultural oil, insecticidal soap or malathion, which are among the compounds registered for control of this pest in Connecticut. Consult the labels for dosage rates, safety precautions, and preharvest intervals.

Mites.
Mites are related to spiders. Most are microscopic, have eight legs and spin webs. Most of them like hot, dry conditions and will multiply rapidly when these conditions are present. They feed on the undersides of leaves with their piercing-sucking mouthparts. Symptoms of mite feeding are a yellow stippling of leaves and, when the infestation is severe, webbing may encase the plant. At this point, it is very hard to get miticides through the webbing to effect control.

The predatory mite, Neoseiulus fallacis, is most commonly found feeding where there are mite infestations. Insecticidal soap and ultrafine horticultural oil, which are among the compounds registered for use against this pest in Connecticut, will control mites. Multiple applications may be needed. Consult the labels for dosage rates, safety precautions, and preharvest intervals. Low rates (1/2 to 1%) of oil are highly selective and will kill pest mites while preserving beneficial predatory mites.

Spittlebugs, Philaenus spumarius.
Both adults and nymphs of this insect cause a stunting, curling, twisting of the terminal growth, side branches and leaves of many plants. The nymphs of this true bug cover themselves with a frothy material. There may be multiple yellowish nymphs per spittle mass. Adults look like broad leafhoppers, are usually darker in color with some striping and under 1/2" long. Like leafhoppers they jump readily when disturbed. Winter is passed as eggs laid under or in the bark of nearby woody plants. There is usually one generation per year. When needed, malathion, which is among the compounds registered for control of this pest in Connecticut, sprayed on terminal branches during the spring and early summer should be effective. Insecticidal soap may also be useful. The spray needs to penetrate the spittle mass. Consult the labels for dosage rates, safety precautions, and preharvest intervals.