See Perennials for a detailed discussion of problems that may occur and are common to most herbaceous ornamentals.

Gray mold, flower and leaf blight, Botrytis cinerea.
This fungus occurs everywhere and commonly infects senescing or damaged plant parts such as old flowers, causing a fuzzy gray mold. Spores are produced which are easily blown around. From these tissues the fungus moves into healthy stems and leaves, causing a damaging blight. Disease is favored by cool wet conditions and the presence of overripe fruit or old flower petals.

Sanitation is the most important means of control. Remove dead flowers before gray mold develops. If disease has moved into leaf or stem parts, control may also be achieved with the use of fungicides applied as soon as symptoms are visible. Among the compounds registered for use in Connecticut is thiophanate-methyl. Consult the label for dosage rates and safety precautions.

Powdery mildew, Eyisiphe spp.
These fungi are obligate plant parasites which grow vegetatively on the plant leaf surface, sending haustoria, structures which absorb food from the host, into epidermal cells. The white mildew seen on the leaf is a combination of vegetative mycelium and spores borne in chains on upright conidiophores. Wind-dispersed mildew spores can germinate without free water under high humidity conditions, and disease is often severe when conditions are humid but dry. Small black over-wintering structures called perithecia are often found in powdery mildew affected areas.

Control may also be achieved with the use of fungicides applied as soon as symptoms are visible. Among the compounds registered for use in Connecticut are potassium bicarbonate, ultra fine oil, sulfur, triadimefon, or thiophanate-methyl fungicides. Consult the label for dosage rates, safety precautions, and directions for use.

Wilt, Sclerotinia sclerotiorum.
Leaves and stems usually wilt and dry up, followed by death of the whole plant. Sclerotia which look like mustard seeds are often found inside the stem.

Infected plants and soil should be removed, and fresh clean soil used as a replacement.

Virus, mosaic.
A number of different viruses can attack perennials. These viruses are obligate parasites which are not themselves alive, but use plant cell metabolism to replicate and produce more virus. Symptoms of infection are commonly loss or mottling of color, yellowing, yellow rings, stunting, and/or deformed leaves, flowers or buds. Viruses can be transmitted by mechanical means such as touching or rubbing leaves with hands or tools contaminated by contact with diseased plants, by dodder, nematodes, grafting or insects such as aphids, leafhoppers, whiteflies, or thrips.

Root-knot nematodes, Meloidogyne hapla.
The northern root-knot nematode, M. hapla, is a sedentary endoparasite, meaning that it infects host roots after hatching from eggs, stimulating the formation of a small gall containing specialized feeding cells, and feeds in the same location through several molts to produce several hundred offspring. Because most of its life cycle is inside roots, it may be spread to new locations with vegetative propagation material. This nematode is parthenogenetic, a single female can reproduce without males, resulting in a new generation every 28 days under ideal conditions. The galls produced on roots interrupt translocation and act as a nutrient sink. As a result, plants may be stunted, wilt easily, and show signs of nutrient deficiency. The nematode has a wide host range, but a number of ornamentals, including Rudbeckia, Aster, and others, have been shown to be resistant. 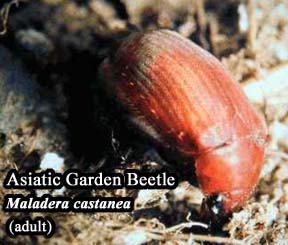 Asiatic garden beetle, Maladera castanea.
The grubs of this imported insect also feed on the roots of grass and are responsible for considerable injury to lawns. The life history is similar to that of the oriental beetle, but adults fly more and are attracted to lights. Adults feed at night on many kinds of plants, especially aster, barberry, bean, cherry, chrysanthemum, currant, dahlia, geranium, catalpa, seedling conifers, rhododendrons and strawberries. During the day, the beetles, which hide in the soil around the plants, are seldom seen unless one knows where to find them. The beetle is about 3/4" long, velvety cinnamon brown with a faint iridescence.
Treating the lawns with insecticides described under Oriental beetle usually gives effective control. Asiatic garden beetle appears to be the least susceptible of the four common exotic scarabs to imidacloprid, and also may not be controlled with halofenozide, but is susceptible to trichlorfon.

Columbine aphid, Kakimia essigi.
The columbine aphid, Kakimia essigi, in addition to several other species often causes stunting of the foliage in late summer. Spraying with ultra-fine horticultural oil, insecticidal soap or malathion, which are among the compounds registered for use against this pest in Connecticut, will control the aphids if they become a problem. Imidacloprid, applied as a systemic to be taken up by the roots, will also provide season-long control. Consult the label for dosage rates and safety precautions.

Columbine borer, Papaipema purpurifascia.
The larva of this moth is a borer in the stem of columbine, often going downward into the fleshy roots. The 1-1/2" borer is salmon colored with a pale stripe along the back. The moth has a wingspread of 1 1/4" and the forewings are light reddish brown in color with darker cross bands and purplish tips.

When needed, some degree of control can be achieved by raking the soil around plants in the spring to destroy eggs, which are laid directly on the ground. Among the compounds registered for control of this pest in Connecticut are beneficial nematodes and permethrin. Beneficial nematodes, Steinernema carpocapsae, can be sprayed into stem tunnels for control of larvae feeding there. When needed, adults can be controlled by permethrin sprays aimed at the base of the plant in late April. Consult the label for dosage rates and safety precautions. 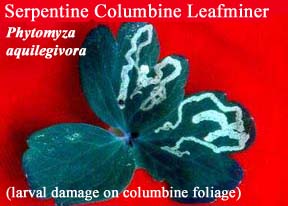 Columbine leafminers, Phytomyza aquilegivora and P. acquilegiana.
Two species of leafminers attack columbine. One, Phytomyza aquilegivora, makes serpentine mines and the other, P. acquilegiana, blotch mines. The miners feed to maturity and pupate on the undersides of leaves. The tiny flies emerge in about 2 weeks. In the fall, fully grown miners drop to the ground and crawl into the soil to spend the winter.
Control in the home garden can involve handpicking leaves at the first sign of mining activity as well as thorough destruction of all plant material in the fall. Slightly working the soil to expose overwintering larvae might provide some control. Imidacloprid can be applied as a soil drench for season-long, systemic control. Other effective products include abamectin (a restricted use insecticide) and spinosad. Consult the label for dosage rates and safety precautions.

.
Green caterpillar-like larvae feed on columbine leaves, often defoliating plants just as they begin to bloom. Feeding begins at the leaf margins and progresses inward. Their presence on damaged leaves may be difficult to detect because they can grip the edge of the leaf with their back legs and hide beneath the leaf when they sense someone approaching. Small plants can be quickly defoliated, leaving only green twiggy stumps behind. They are presently thought to have only one generation each year.

As soon as leaves emerge, begin scouting the upper and lower leaf surfaces of susceptible plants. A non-chemical option in the small garden is to handpick larvae. Initially larvae may be difficult to find because of their small size and camouflage. Foliar insecticide sprays can also be effective. In Connecticut, contact acting products such as acephate, pyrethrins, permethrins, and spinosad can be used against this pest, as long as the label lists sawflies and application sites such as perennial or landscape beds. Horticultural oil and insecticidal soap may be used when larvae are small, but the spray must coat all the sawflies for good control. Products containing imidacloprid can be applied as a soil drench early in the season. It is important to note that Bacillus thurengiensis (B.t.) products will not be effective against this pest because it is not a butterfly or moth larvae.  Do not apply foliar insecticides during bloom while bees or hummingbirds are present. Be sure to read and follow all label directions.

Columbine skipper, Erynnis lucilius.
The larvae chew holes in the leaves of columbine. It also rolls up the leaves when not feeding. At maturity, the 3/4" caterpillar is green in color with a small black head. The adult is a butterfly. When needed, spinosad or Bacillus thuringiensis var. kurstaki, which are among the compounds registered for use against this pest in Connecticut, can be applied for control of small caterpillars. Consult the label for dosage rates and safety precautions.

Stalk borer, Papaipema nebris.
The stalk borer occasionally tunnels in the stalks of columbine. This borer infests an occasional stalk of many kinds of herbaceous plants and it frequently causes rather severe injury to dahlia. As a rule its presence escapes notice until the plant begins to wilt. Then it is too late for the plant to recover. The larva tunnels up and down inside the stem and the top portion usually wilts and later dies. There is one annual generation. The moths emerge in September and October and lay eggs on the stalks of their food plants, in which stage the insect passes the winter. The eggs hatch in May or early June. The young larva begins to feed on the leaves of the nearest food plant, and later tunnels in the stem. The mature larva is nearly 1 1/2 inches in length, grayish brown with one white dorsal stripe and two white lateral stripes on each side. On the front half of the body the lateral stripes are interrupted, and the lower brown stripe extends forward onto the side of the head.
Burning all the old stalks, if allowed, and destroying weeds at the edges of the garden helps control this insect. When needed, methoxychlor, which is among the compounds registered for use against this pest in Connecticut, applied as a dust, in June, should control this pest. Consult the label for dosage rates and safety precautions.