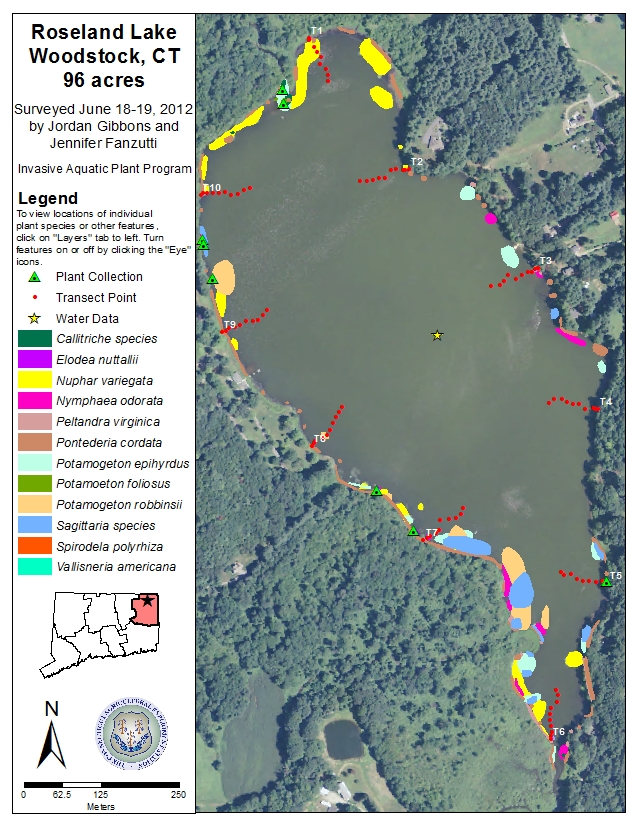 2012 Aquatic Plant Survey Map of Roseland Lake
Transect Data | Water Data
Roseland Lake is a 96-acre lake located in Woodstock, CT. Public boat access is along the north half of the western shoreline where there is a town park. The park runs along much of the western shoreline. The north shoreline is heavily wooded. The east and south shorelines have light residential development.
The 2012 CAES IAPP survey found 12 aquatic species growing in the lake, none were invasive. The most dominant plant was yellow water lily (Nuphar variegata). It grew in large patches to the north as well as smaller patches along the western and southern shore. A shoreline species, pickerelweed (Pontederia cordata) was found growing along much of the shoreline. The majority of the lake had a thin shallow area before the bottom of the lake dropped to deeper depths were light can't reach and plants can't grow.
The most species rich area was in the southern cove. This area was very shallow, allowing for light to reach the bottom and enabling greater plant growth. Various native plants such as yellow water lily, white water lily (Nymphaea odorata), green arrow arum (Peltandra virginica), pickerelweed, ribbon-leaf pondweed (Potamogeton epihydrus), Robbins' pondweed (Potamogeton robbinsii), and arrowhead (Sagittaria species) were found there. Leafy pondweed (Potamogeton foliosus) was found only in the north near an inlet. Eelgrass (Vallisneria americana) was only found as a single plant along the eastern coast in one location.