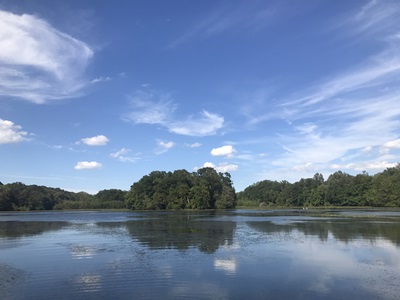 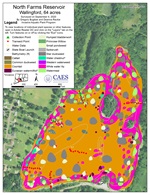 North Farms Reservoir is a 64-acre reservoir located in Wallingford, CT. It has a public boat ramp and a mostly undeveloped shoreline. Most of the reservoir is shallow with an average depth of 2.0 meters. This characteristic has allowed the abundantly growth of aquatic vegetation. The abundance of aquatic vegetation makes boating in here difficult.

In 2020, CAES IAPP performed the third survey of North Farms Reservoir after reports of the presence of invasive water chestnut (Trapa natans). Water chestnut was confirmed as well as the invasive Eurasian watermilfoil (Myriophyllum spicatum). In addition to the two invasive species, 11 native species were found. This is an increase from the seven species found in 2009. The invasive minor naiad (Najas minor) was found in 2009 but was not found in 2020.

North Farms Reservoir has very abundant plant growth. The native coontail (Ceratophyllum demersum) was found in almost the entirety of the lake. White water lily (Nymphaea odorata), watermeal (Wolffia species), and star duckweed (Leman trisulca) were found in abundance along the shoreline. Access to Transect 6 was not possible because of the dense vegetation. Invasive water chestnut was found in the southwestern and northwestern portions of the reservoir. Invasive Eurasian watermilfoil was found sporadically throughout the lake, but neither invasive were as abundant as the native species.