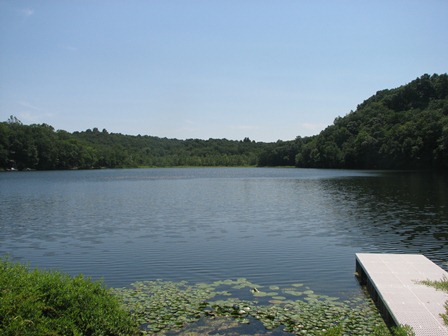 Linsley Pond is a small waterbody with a surface area of 22.9 acres. It has a maximum depth of 44 feet and a mean depth of 20.5 feet. There is minimal residential development along the shoreline. There is no public access.

During our August 2005 survey, we observed aquatic vegetation only near the shore and most was at depths less than 6 feet. The only break in vegetation was at a small beach area on the northern shore. Coontail (Ceratophyllum demersum) was the most abundant species, occurring as a continuous ring around the pond. White water lily (Nymphaea odorata) closely followed in abundance, occurring on all sides of the pond but mostly in the southern end. Flat-Stemmed pondweed (Potamogeton zosteriformis) and Illinois pondweed (Potamogeton illinoensis) also were found along the shoreline. Water stargrass (Zosterella dubia) was found on the north, east, and south sides of the lake, while yellow water lily (Nuphar variegata) only was found on the east and south sides. White stem pondweed (Potamogeton praelongus), leafy pondweed (Potamogeton foliosus), and western waterweed (Elodea nuttallii) only occurred along the north shore.