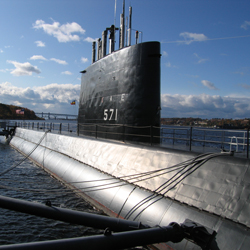 Built by Connecticut craftsmen and women, USS Nautilus was the world's first nuclear powered submarine and logged more than 500,000 nautical miles during her distinguished 25 year career.  The USS Nautilus, named Connecticut's State Ship by the 1983 General Assembly, has been designated a National Historic Landmark and is permanently berthed next to the Submarine Force Library and Museum at Goss Cove in Groton.  Reproduced from the Connecticut State Register & Manual with permission of the Secretary of the State.