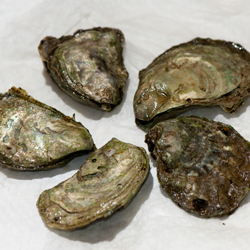 The Eastern oyster was designated as the State Shellfish by the General Assembly in 1989. The oyster, which is a bivalve mollusk, thrives naturally in Connecticut's tidal rivers and coastal embayments and is cultivated by the oyster industry in the waters of the Long Island Sound.  Oysters were consumed in great quantities by Connecticut's native American inhabitants, and early European settlers found oysters to be a staple and reliable food source. The first colonial laws regulating the taking of oysters in Connecticut appeared in the early 1700's.  Oyster farming developed into a major industry in the State by the late 19th century. During the 1890's, Connecticut held the distinction of having the largest fleet of oyster steamers in the world.  Today, Connecticut's oyster industry continues to thrive. Thousands of bushels of these delicious Connecticut-grown mollusks are marketed throughout the country annually. Of all the shellfish species associated with the Connecticut shoreline, the oyster is by far the best known for its colorful history, continued economic importance and esteemed reputation for quality.  Reproduced from the Connecticut State Register & Manual with permission of the Secretary of the State.