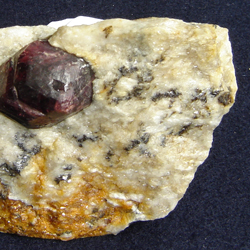 Connecticut is one of the finest sources in the world of the almandine garnet, named the state mineral by the 1977 General Assembly. An ancient gem, it was named "garnata" in the 13th century by Albertus Magnus and was known as the "Carbuncle" in its likeness to a small, red hot coal.  The garnets are actually a group of similar minerals, complex silicates of the same atomic structure, but differing in chemical composition. They vary in color from pale to dark tints, including the deep violet-red of the almandine garnet.  This mineral's hardness, 7 on the Mohs scale, has made the garnet useful as an abrasive, resulting in an important industry throughout Connecticut's history. It contributed to this development by providing the base for grinding wheels, saws, and the better cutting quality of garnet paper, a variety of sandpaper.  Samples of the garnet and other minerals from Connecticut and around the world may be viewed at the Connecticut State Museum of Natural History at Storrs. For information, call 860-486-4460.  Reproduced from the Connecticut State Register & Manual with permission of the Secretary of the State.