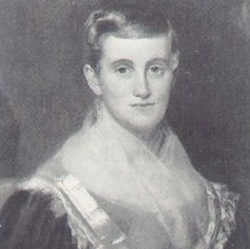 On October 1, 1995, by an act of the General Assembly, Prudence Crandall became Connecticut's State Heroine.  In 1833, Prudence Crandall established the first academy for African-American women in New England. During its 18 months of operation, Crandall and her students faced hardships and violence. She was placed on trial twice for breaking a law specifically designed to prevent the school from operating. In the fall of 1834, although the charges against her were dismissed, the school was closed.  Prudence Crandall demonstrated great courage and moral strength by taking a stand against prejudice. In 1886 the legislature honored her with an annual pension of $400.00.  The Prudence Crandall House is a National Historic Landmark located at the intersection of 14 and 169 in Canterbury. It is operated by the Connecticut Historical Commission. Reproduced from the Connecticut State Register & Manual with permission of the Secretary of the State.