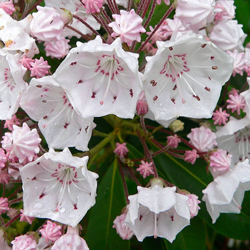 Designated as the State Flower by the General Assembly in 1907, the Mountain Laurel is perhaps the most beautiful of native American shrubs. Its fragrance and the massed richness of its white and pink blossoms so vividly contrast with the darker colors of the forests and the fields that they have continually attracted the attention of travelers since the earliest days of our colonization. First mentioned in John Smith's "General History," in 1624 specimens were sent to Linnaeus, the famous botanist, by the Swedish explorer Peter Kalm in 1750.  Linnaeus gave it the name of Kalmia latifolia, honoring the name his correspondent and at the same time describing the "wide-leafed" characteristic of the plant. In addition to being called the "Mountain Laurel," the plant has also been spoken of as "Calico Bush" and "Spoonwood." Reproduced from the Connecticut State Register & Manual with permission of the Secretary of the State.