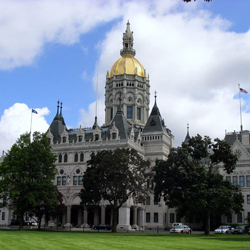 Overlooking Hartford's 41 acre Bushnell Memorial Park, the Connecticut State Capitol first opened for the General Assembly in January, 1879.  Initial work on the project had begun eight years before in 1871 when the legislature established a special commission and appropriated funds for construction of a new statehouse. The site was contributed by the city of Hartford, and the commission retained James G. Batterson to build the Capitol from plans designed by noted architect Richard M. Upjohn.   Constructed of New England marble and granite and crowned by a gold leaf dome, the Capitol was built at a cost of $2,532,524.43 and has an estimated replacement value of more than $200,000,000.  In addition to housing the State Senate Chamber, Hall of the State House of Representatives and offices of the Governor, Lieutenant Governor, and Secretary of the State, the statehouse and surrounding grounds abound with memories and mementos of Connecticut's early years.   The Connecticut State Capitol was declared a national historical landmark by the United States Department of Interior in 1972.  Reproduced from the Connecticut State Register & Manual with permission of the Secretary of the State.