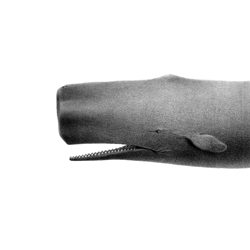 The Sperm Whale was designated as the state animal by the General Assembly in 1975. It was selected because of its specific contribution to the state's history and because of its present-day plight as an endangered species.

The Sperm Whale is the largest of the toothed whales, growing up to 60 feet in length and capable of diving over 3,000 feet in search of the squid and cuttlefish on which it feeds. The sperm whale's brain is the largest of any creature that ever existed on earth. The great American novelist Herman Melville wrote about these creatures in his famous book "Moby-Dick."

During the 1800's Connecticut ranked second only to Massachusetts in the American whaling industry. The sperm whale was the species most sought after by Connecticut whalers circling the globe on ships out of New London, Mystic and other Connecticut ports to bring back needed oil for lamps and other products.