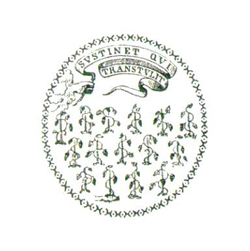 Connecticut's first seal was brought from England by Colonel George Fenwick in 1639. It was the seal of the Saybrook Colony and was turned over to the Connecticut Colony at about the time that it purchased the land and fort at Saybrook Point from Colonel Fenwick in 1644. The seal was used by the General Court (General Assembly) from that time forward, but there is no clear record of who had custody of the seal. On October 9, 1662, the same day that the new Royal Charter was read aloud at Hartford, the assembly formally declared that the seal would be kept by the Secretary of the Colony and used as the Seal of the Colony on necessary occasions. It remained the colony's seal until October 1687, when Sir Edmund Andros took control of the colony's government and the seal disappeared. It is presumed to have been destroyed. Reproduced from the Connecticut State Register & Manual with permission of the Secretary of the State.