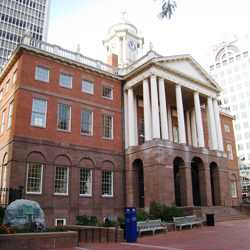 Designed by Charles Bulfinch and built in 1796, the Old State House is the oldest state house in the nation. The building opened in May 1796. Oliver Wolcott, signer of the Declaration of Independence was the first Governor to serve here. The building was the seat of state government until 1878, when the present Capitol was opened.      Major state and national events have, and continue to occur at the Old State House. Lafayette was made a citizen here, many American presidents, including Jackson, Monroe, Johnson, Ford and Bush have visited. President Carter gave the U.S.S. Nautilus to Connecticut in a ceremony at the Old State House in 1981. The trials of Cinque and the Amistad opened here in 1839. P.T. Barnum served in the legislature here, and notables such as Mark Twain, Charles Dickens, Samuel Colt and Harriet Beecher Stowe visited the building.      The Old State House is a registered National Landmark. The restored historic chambers and grounds are now site of events such as the Old State House’s Conversations at Noon series, the Old State House Farmer’s Market, exhibitions, concerts and guided tours. The Old State House also hosts school groups and provides many educational and engaging programs that cover a variety of topics for multiple grade levels. It is run as a non-profit by the Connecticut Public Affairs Network, Inc. You can learn more about the Old State House, its programs and upcoming events by visiting its website at www.ctosh.org. Reproduced from the Connecticut State Register & Manual with permission of the Secretary of the State.