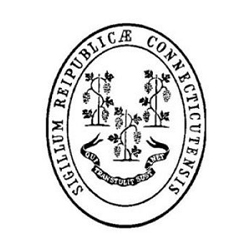 After the conclusion of the Revolutionary War, the inscription on the colonial seal was no longer appropriate. Therefore, in May of 1784 the General Assembly directed the Secretary to alter the inscription to read "SIGILL. REIP. CONNECTICUTENSIS." However, when a new version of the seal was prepared, the inscription contained the words spelled out ---SIGILLUM REIPUBLICAE CONNECTICUTENSIS (Seal of the State of Connecticut). There has been no subsequent alteration to the official state seal. In 1931, the General Assembly required that all representations of the state seal conform to the description in Chapter 54 of the Public Acts of that year. This legislation also prohibited reproduction of the seal except by or under the direction of the Secretary of the State.

The Connecticut State Seal is an official emblem of the State.

Reproduction of State Arms and Seal:
Please be advised that permission is required to reproduce the state arms and seal under Section 3-106a of the Connecticut General Statutes:

Sec. 3-106a. Reproduction of arms and seal. The official arms and seal of the State of Connecticut, or imitation thereof, whether as a reproduction, imprint or facsimile, shall be made and used only under the direction and with the approval of the Secretary of the State for purposes specifically authorized by the constitution and laws of the state or related directly or indirectly to the official business of the state, provided the secretary may in his judgment approve other reproductions of said arms or seal of the state for memorials and for purposes he considers educational.