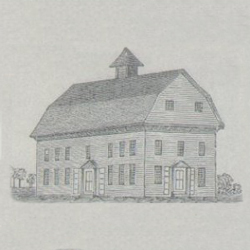 The First State House in Hartford served from 1720 until 1796, when the adjacent and recently completed Old State House opened. Earlier buildings occupied the site, but this was the first structure built as a state house. The square was laid out in 1636 with the founding of Connecticut and city of Hartford. The Fundamental Orders of 1638/39 were ratified on this site. In 1687, the Charter of 1662 was stolen from this site and hidden in the Charter Oak Tree. Here General Washington first met Rochambeau and the French armies in America, and planned the Yorktown strategy. And, it is here that Connecticut delegates gathered to consider ratification of the U.S. Constitution. In 1783, a watchman dropped a lighted candle and the building partially burned. As a consequence of the damage caused by the fire, the present Old State House was built. Reproduced from the Connecticut State Register & Manual with permission of the Secretary of the State.