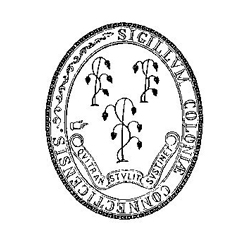 Self-government returned to Connecticut in 1689, but for a number of years only a poorly fashioned substitute seal was used.  On October 25, 1711, a meeting of the Governor and Council (upper house of the assembly) resolved, "that a new stamp shall be made and cut of the seal of this Colony, suitable for sealing upon wafers, and that a press be provided with the necessary appurtenances, for that purpose, as soon as may be, at the cost and charge of this Colony, to be kept in the secretary's office."  The new, less elaborately decorated seal was larger in size and more oval shaped than the original. The words of the motto remained the same, but the number of grape vines was reduced to three and the legend SIGILLUM COLONIAE CONNECTICUTENSIS (Seal of the Connecticut Colony) is added to the edge of the seal. The three vines may have been intended to represent the three colonies, New Haven, Saybrook, and Connecticut (Hartford), which, by 1665, had merged to form the Connecticut of that time. Reproduced from the Connecticut State Register & Manual with permission of the Secretary of the State.