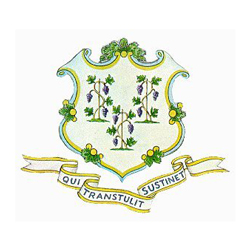 On March 24, 1931, the General Assembly adopted a design for the official Arms of the State, which it ordered drawn and filed with the Secretary of the State.  The official description of the Arms calls for: A shield of rococo design of white field, having in the center three grape vines, supported and bearing fruit. Below the shield shall be a white streamer, cleft at each end, bordered with two fine lines, and upon the streamer shall be in solid letters of medium bold Gothic the motto: "QUI TRANSTULIT SUSTINET" (He Who Transplanted Still Sustains). The official arms and seal of the State of Connecticut, whether as a reproduction, imprint or facsimile, shall be made and used only under the direction and with the approval of the Secretary of State. Reproduced from the Connecticut State Register & Manual with permission of the Secretary of the State.