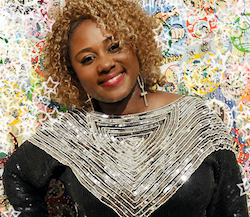 There was never a question that music would be a part of Nekita Waller’s life. From her stage debut as a teen at the famous Apollo Theater in Harlem, to singing the National Anthem to thousands of spectators at professional sporting events as an adult, music defines Nekita’s life.

Nekita’s diverse musical journey has taken her through chorus groups, musical theater, Hartt School of Music, Gospel in church, and mentoring and performing with many independent artists. Nekita has shared the stage with artists, B.B. King, Ruben Studdard and Dianne Reeves. She has performed on the Steve Harvey Radio Show and has been heard on more than 60 radio stations and by approximately six million weekly listeners. Nekita is an experienced studio session artist as a recording artist, lending her vocal talent on projects with Grammy and Emmy award-winning producers.

Nekita performs with her band of accomplished musicians throughout the region, bringing a mix of pop, Motown, soul, Jazz and classic rock favorites with original music. As a soloist, she sings the National Anthem for the NBA, WNBA and DIV I College sports teams.

Nekita wants to use this title to visit schools and meet children who don’t have the same level of opportunities afforded to them as others. “Music is my purest form of communication. It doesn’t care how much money you have, where you were born, the color of your skin, or how old you are,” notes Nekita. “There is no greater feeling or purpose than to help another person. Whether it is to make someone smile, dance, brighten their day or help them reach a better level of themselves, this is life’s greatest award.”