NOTICE: The Office of the Attorney General is currently closed to the Public. Click here for more information 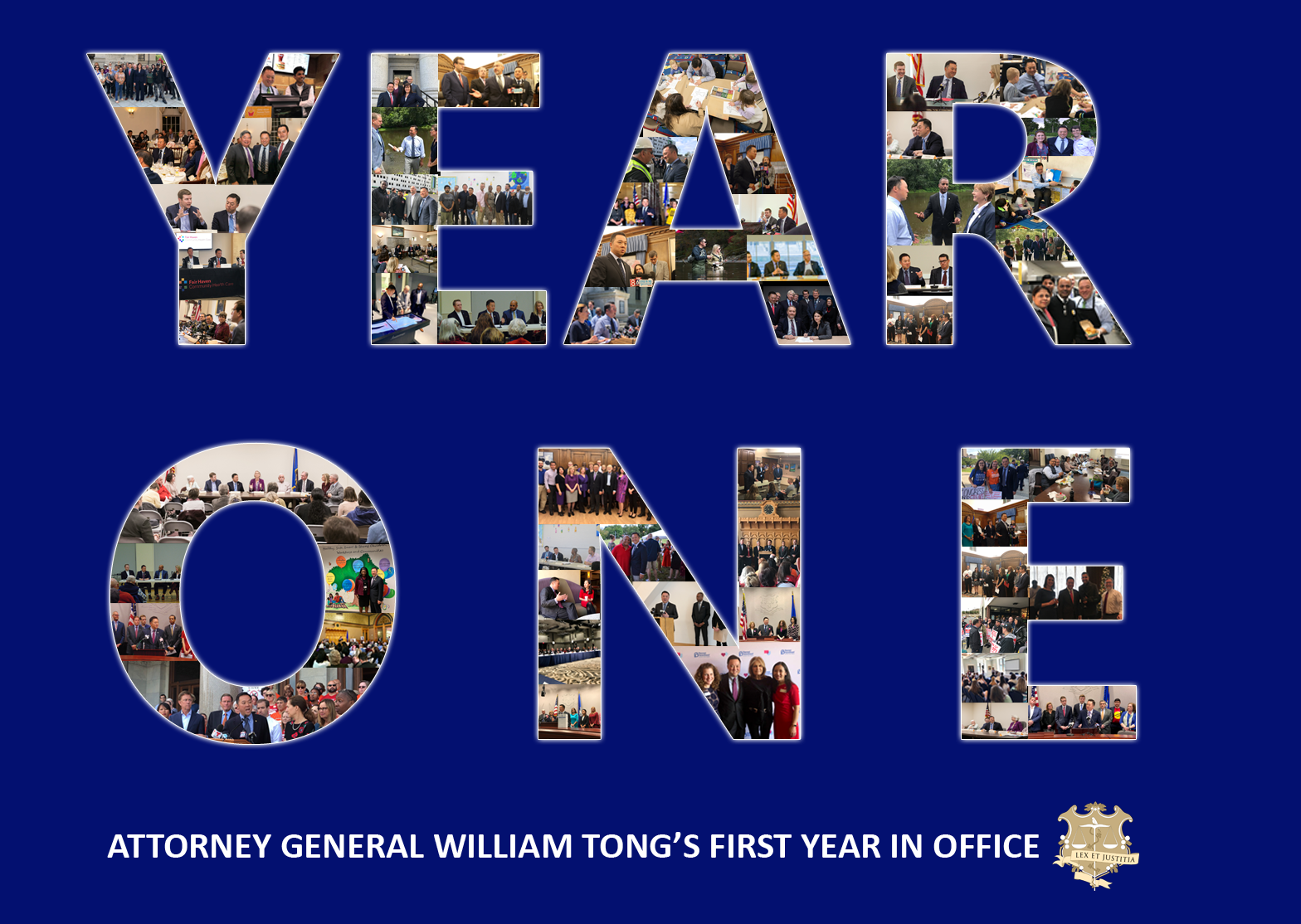 One year ago, I raised my right hand and took an oath to support the Constitution of the United States, the Constitution of the state of Connecticut, and to faithfully discharge the duties of the Office of Attorney General. It has been my honor and privilege each and every day since then to lead the 313 men and women of this office— our 215 skilled and dedicated attorneys, as well as paralegals, investigators, assistants and more who represent the State and Connecticut's families on the front lines of our legal system.

In fiscal year 2018-19, our office generated $773.6 million in revenues, 26 times our operating costs. Add on top of that the work done by our departments that defend the state in the hundreds of lawsuits, claims, and administrative proceedings brought each year. Their excellent and effective work saves the state countless millions by limiting exposure, liability and costs of litigation.

I could not be more proud of the work we have accomplished together, but am humbled by the monumental tasks that remain always ahead to fulfill my promise to this state and to all families that reside here. Here are some of the top achievements and priorities of our office over the past year, with a look forward to the work that will drive us in the year to come.

Last April, we expanded our lawsuit against Stamford-based Purdue and members of the Sackler family, adding new allegations and evidence. When a minority of states splintered off to broker a weak settlement deal with Purdue, we objected and held the line. My team and I traveled extensively over the past year for face-to-face negotiations with attorneys general in Cleveland, Denver, Washington, here in Connecticut and elsewhere. Led by Special Counsel for Opioids Kim Massicotte, our opioid group is working tirelessly to keep the focus on the victims and families whose lives have been devastated by Purdue's craven pursuit of profit.

Our investigation into alleged illegal price-fixing and anti-competitive behavior by some of the nation's largest generic drug manufacturers is active and expanding. Our generics team—led by Assistant Attorneys General Joseph Nielsen, Laura Martella, and Michael Cole, chief of the Antitrust and Government Program Fraud Department—filed our second large multi-defendant, multi-drug lawsuit in May. We saw several important court victories over the past year, including surviving a motion to dismiss filed by defendants. We expect to see major developments in the case in the coming year.

The Office of the Attorney General is first and foremost the state's lawyer, and we defend Connecticut's interests on a host of legal fronts. This past year saw significant breakthroughs in some of the most complex legal issues confronting our state.

Climate and the Environment

Our environment team, led by Assistant Attorney General Matthew Levine, has been busy pushing back on an Administration that ignores science and is trying to systematically dismantle decades of law protecting our climate, clean air, water and clean energy systems. Over the past year, we sued to protect endangered species, to defend our state from un-checked cross-state air pollution, and to preserve the rights of states to protect our own waters.
But our work is not just at the federal level. Our team worked in tandem with the Department of Energy and Environmental Protection to enforce state laws in Naugatuck and Washington, Connecticut to hold polluters accountable for illegal dumping and spills that harm quality of life in our local communities. We continue to monitor ongoing PFAS testing on the Farmington River and other drinking water sources in Connecticut, and will evaluate legal options as information becomes available.

We are closely watching lawsuits filed against the fossil fuel industry by our neighboring states, and are reviewing options to hold the industry accountable in Connecticut for decades of misinformation on climate change.

Last year, we authored legislation to bring Connecticut into line with our sister states by formalizing the ability of our office to investigate—and where evidence warrants—bring civil rights lawsuits to stop large-scale, systematic violations of existing constitutional and statutory rights. I am working closely with my former colleagues in the legislature to reintroduce the bill in this upcoming legislative session.

This office is committed to the proactive pursuit of justice for those whose rights and liberties are under attack. Over the past year, we have taken aggressive positions to keep families together, to protect women's freedom in healthcare choices, to defend the rights of LGBTQ people, and more.

Today, more than ever, this office is the firewall protecting Connecticut families from overreach and attacks by the federal government. In coordination with attorneys general across the nation, we are in court defending access to affordable healthcare, a woman's right to choose, environmental standards, and access to safe, affordable housing. We are fighting for Dreamers—young adults brought to this country as children whose lives have been thrown into limbo by the President's arbitrary and unlawful decision to revoke Deferred Action for Childhood Arrivals. Over this past year, our coalitions successfully blocked many of Trump's disastrous policies by obtaining court-ordered injunctions in cases involving DACA, border wall funding, Byrne law enforcement grants, Public Charge, the citizenship census question, indefinite detention of immigrant families, and efforts to strip access to cost-free birth control. These fights are far from over, and we will continue to defend the rule of law, the Constitution, and Connecticut's families.

From our open investigations into JUUL, Google and Facebook to our antitrust suit blocking the T-Mobile/Sprint megamerger, protecting Connecticut consumers is a key focus of this office. Connecticut co-led the nationwide investigation into the 2017 Equifax data breach, which exposed the data of 56 percent of American adults—the largest ever breach of consumer data. The investigation resulted in a $600 million settlement reached last July, the largest data breach settlement in American history. Our attorneys took strong action before the Public Utilities Regulatory Authority to protect vulnerable ratepayers from third-party electric suppliers, and helped secure refunds for thousands of consumers overcharged due to systematic rate notification errors by third-party suppliers. We worked with attorneys general across the nation to forge a new collaborative agreement with the telecom industry to jointly combat nuisance robocalls. Our consumer protection and environment units teamed with 51 states and territories to reach settlements in the emissions cheating scandals with Fiat Chrysler and Bosch that collectively brought $4.36 million to the state's general fund. We fought hard on behalf of families across Connecticut struggling to afford mounting student loan debt— obtaining debt relief for students of defunct for-profit colleges, and taking the federal administration to task for sweeping errors in the Public Service Loan Forgiveness program.

Every day, the Office of the Attorney General fields calls, emails and letters from constituents in need of assistance. From helping veterans targeted by scams to recouping funds from unscrupulous home improvement contractors, we are here to help. Whether you have been a victim of a scam, are having trouble with a medical bill or insurance, can't figure out your student loan repayment options, or have an issue with your landlord please reach out to our office at 860-808-5420 or by email at Attorney.general@ct.gov.