Stay informed about coronavirus (COVID-19): Connecticut residents are urged to continue taking precautions to prevent the spread of COVID-19.

Phase 2 of Connecticut's reopening efforts will take effect June 17. Additional safety guidance for businesses that fall under Phase 2 will be released early next week.

For the latest information and guidance, visit ct.gov/coronavirus.

NOTICE: The Office of the Attorney General is currently closed to the Public. Click here for more information 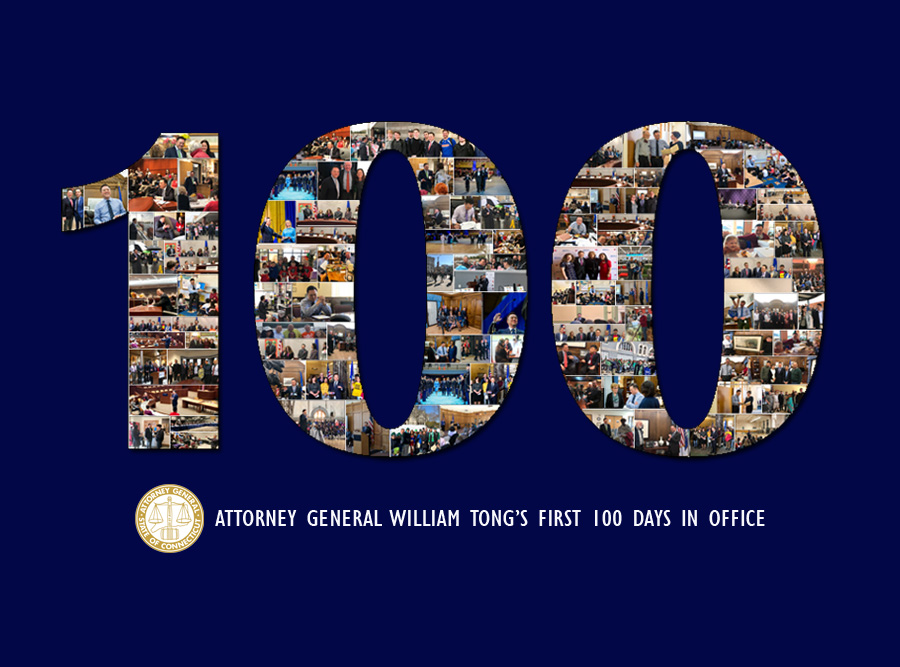 Today marks 100 days since I first took the oath of office as your 45th Attorney General. The issues that the office is confronted with on a daily basis are challenging and complex. Families across Connecticut are feeling squeezed and threatened by powerful forces outside of their control-- the cost of healthcare, the loss of privacy in an increasingly digital world, and cruel and draconian federal policies that have left many in our state fearing for their safety. The Office of the Attorney General has the opportunity and responsibility to be the firewall – to stand between families and those powerful forces and to defend what is right and fair. As Attorney General, that is what I strive to do each and every day. I wanted to share with you some of the top priorities and actions of our office since January 9, and some major news to follow in the weeks and months ahead.

This month, we will file an expanded, amended complaint in our lawsuit against Purdue Pharma and members of the Sackler family. Our complaint will detail new allegations regarding the specific, illegal conduct by Purdue and the Sackler family within Connecticut to push opioids and profit from pain and addiction. Connecticut is taking strong, aggressive action against Purdue, as well as its owners, managers, and directors for their role in the opioid epidemic that has caused devastating harm to the people of this state. This is an ongoing investigation and Connecticut is a leader in the multistate investigation and negotiation team. Our actions seek to hold those responsible accountable and secure resources for long-term treatment and recovery.

Taking on the High Cost of Generic Drugs

We are preparing to file a second complaint against additional defendants in our ongoing, expanding investigation into alleged industry-wide price-fixing in the generic drug industry. Connecticut is leading 49 states and territories in what we believe to be the largest antitrust cartel case in the history of the United States. It is hard to overstate the impact this case could have on our economy and healthcare system. The United States generic drug market accounts for over 90 percent of all prescriptions filled. Skyrocketing prescription drug prices have created enormous pressure on our insurance premiums, and have driven up taxpayer costs for our publicly-funded healthcare programs.

The Trump Administration has declared war on the American healthcare system, and we have joined states across the nation in multiple actions to protect millions here in Connecticut and across the country whose health and lives are at risk. We are in court in Texas alongside 20 sister states defending the Affordable Care Act. In Connecticut alone, approximately 85,000 individuals receiving federal-subsidized insurance could lose that assistance. Connecticut stands to lose billions of dollars in Medicaid expansion funding. Tens of thousands of young people under the age of 26 would be kicked off their parents' insurance. Insurers would once again be given license to discriminate against half a million Connecticut residents with preexisting conditions like cancer, heart disease and diabetes. We are also seeking an injunction to block the Trump administration from decimating Title X, our nation's preeminent reproductive healthcare program. In Connecticut, over 45,000 patients receive care through Title X, the vast majority at Planned Parenthood health centers. Should Planned Parenthood be forced to no longer participate in the Title X program as a result of the Trump administration’s new unlawful conditions for participation, other providers in Connecticut will not be able to cover the demand for reproductive health care from individuals with low incomes.

Defending the Rule of Law

Connecticut has joined 19 other states in a lawsuit seeking to block the Trump Administration's unlawful attempt to divert $1.6 billion in federal funds to build a border wall. There is no basis for the President to declare a national emergency. We have a constitutional crisis and a broken immigration system that a border wall will do nothing to address. The President is hell-bent on fulfilling a campaign promise motivated by racism and hate, and we will not allow him to trample on our constitution to achieve that. Connecticut is at risk of losing hundreds of thousands of dollars in funding for law enforcement we receive through the Treasury Forfeiture Fund and other sources of funding. The Office of the Attorney General is ready to do what it takes to protect our interests.

The Trump Administration is actively dismantling a system of environmental protection that we have built up over generations. With Congress seemingly unable or unwilling to take action on climate change, it falls to the states—and attorneys general—to take action to protect our future. As both a coastal state and a "down-wind" state at the end of the tailpipe of our nation's exhaust fumes, the actions of our country's heaviest polluters have severe consequences for public health here in Connecticut. In my first 100 days, Connecticut joined with states across the country in a lawsuit aimed at forcing further controls on smog pollution blowing into Connecticut and other states, on an amicus brief in support of San Francisco and Oakland, California in their efforts to hold BP accountable for the cost of sea level rise, and a joint comment letter to the EPA opposing plans to weaken emission standards for new or modified coal power plants. We are taking a hard look right now at all avenues for further legal action to defend against harmful actions by the fossil fuel industry, and expect to have news to share this year on that front.

We receive calls, emails and letters every day from constituents who have been cheated and scammed and the Office of the Attorney General is here to help. When a consumer purchased a new car with serious safety and electric problems, our office was able to get that car replaced. When parents were scammed out of thousands of dollars by a travel agency that abruptly cancelled a promised on a trip for their children and failed to provide refunds, our office was able to get their money back. When an elderly woman was scammed into purchasing a used car despite not being able to drive, our office was able to cancel her loan. This year, we are looking to revamp our Consumer Affairs Unit to improve our ability to track complaints and better assist consumers. Our doors and phones are always open to consumers in need of assistance.

The Office of the Attorney General has returned more than $5.5 billion to the State of Connecticut and its residents over the last ten years—24 times our cost in the last year alone. This does not happen by accident. It happens because of the hard work, dedication and talent of the attorneys and staff here, widely regarded among the best in the nation. One hundred days into this job, I feel tremendously fortunate to lead this team.