The Connecticut State Police Western District Major Crime Squad Detectives are conducting a criminal investigation into the identity theft of a Burlington resident.  A female suspect has utilized the personal information of the Burlington resident to open several bogus charge accounts. These accounts were opened from August 1 through August 6, 2011, using the name and other personal information of the victim.   Troopers have developed investigative leads in this case leading to a female suspect.

Connecticut State Police are seeking the public’s help in identifying the female suspect shown in the photos. This female is a suspect in this identity theft and larceny investigation. The photographs shown were captured at a Target Store in New Britain on August 2, 2011. The female suspect used a bogus credit card to purchase numerous items.  Troopers have developed investigative leads in this case leading to a female suspect.

The suspect female was seen departing the Target store parking lot on August 2nd in the green Jeep Cherokee shown above. It appears that there are several stickers on the rear hatch of the vehicle. Numerous transactions with bogus credit cards have been identified by Troopers in Connecticut and New York.

Connecticut State Police are attempting to identify the female suspect in this photo.  It appears that the female may have a tattoo on her  upper pectoral area, and there are also stickers on the Jeep vehicle.  The stickers may make the vehicle unique and identifiable.

Anyone who may know the identification of this female suspect or who may recognize the suspect vehicle is asked to contact Connecticut State Police Troop L at (860) 626-7900. All calls will be kept confidential. 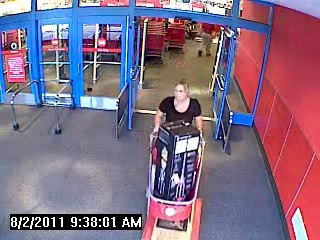 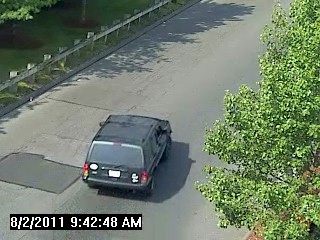