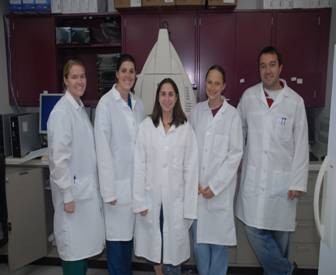 DNA stands for deoxyribonucleic acid.  It is the genetic material that determines who we are both as individuals and human beings.  DNA is found in the nucleus and in the mitochondria of the cell.  The Nuclear Casework Group uses the DNA found in the nucleus of the cell.   This type of DNA testing utilizes short tandem repeat (STR) DNA loci (small regions on the DNA) that have a high power of discrimination, can be multiplexed (many STR’s can be examined in the same test), can indicate when a DNA mixture is present, can be automated, and can be successful with degraded samples.

The first step is to extract (remove) and purify the DNA from the evidentiary or known sample.  Any time semen has been identified in an evidentiary sample a differential extraction method is used, since semen is often found mixed with the victim’s epithelial (skin-type) cells.  This method results in a sperm rich fraction and an epithelial rich fraction from one semen positive sample.  The extracted genomic DNA is then quantified to estimate the amount of human DNA present.  Next, specific sites on the DNA are replicated during an amplification procedure called PCR (polymerase chain reaction).  The amplified DNA is then separated by length with the Applied Biosystems 3100 Genetic Analyzer and analyzed using GeneMapper software.