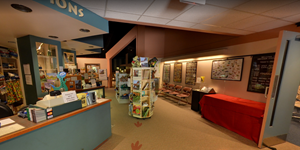 Take a virtual field trip to see some of the amazing exhibits at Dinosaur State Park’s visitor center - without having to travel to the center. Feel the excitement of this virtual tour hosted in Google Street View. Move around and zoom in to a favorite exhibit or look for something new you may not have noticed on a previous trip. On this virtual field trip, immerse yourself in the experience of walking in the footsteps of dinosaurs on the 200 million year old trackway - an adventure not typically open to the public.

Have you ever seen an Otozoum track? These are the footprints of toe-walking dinosaurs and they can be seen on this one-of-a-kind virtual tour. Along with its main trackway of 200 million year old footprints, Dinosaur State Park has many other awesome trace fossils (fossils not made of body parts like bones or teeth). In this activity, investigate one of our favorite artifacts, the Otozoum rock slab. This rock slab was discovered in Portland, CT during the late 1800's and has been on display to the public for over 124 years at various museums in Connecticut. These features were discovered just a few years ago. . . which means that they were discovered by accident after more than 100 years of research! Can you figure out what these features are? What do you notice about the size or shape? Get ready to solve the mystery and visit the link above to help scientists figure out what these mysterious features may be!
Don your virtual science lab coat and find your science notebook to get ready to explore the same features that researchers are currently investigating through an interactive, high-resolution, 3D computer model of the slab. 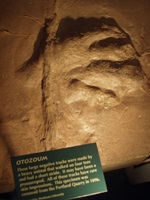 In Activity 1 we looked at some very small tracks at section 1 in our interactive 3D computer model of the rock slab found in Portland, CT in the late 1800s. These tracks located at section 1 could be made by a hopping mammal approximately 200 million years ago during the Early Jurassic!


During your investigations, did you notice that large scrape between the two right most otozoum tracks? This feature is located at sections 3 and 5 in the 3D computer model. This activity will investigate that mysterious feature. So let’s break out your science notebook and start our exploration!

Through interactive online games and activities, learn how the surface of the Earth has changed through time, and how plate tectonics form, destroy, and shape our world. With the Tectonic Plate simulator try you skill at making mountains, volcanic islands, and other awesome plate boundary features!

After completing the online games of “Time Travel across Earth’s Floor”, test your knowledge of plate boundaries and awesome events that occur at those special places. Investigate volcano structure by making your own lava flows!

Dinosaur State Park has a collection of fossils not often viewable to our visitors. In this fossil matching game, we have pulled out of our vault some of our most interesting fossils to share with you! As we know, fossils are more than just designs and patterns in rocks, they were once living creatures that lived in various climates and environments. So . . . are you ready to travel back in time to match the fossil to the animal it came from and the environment in which it lived?

Check your answers in the Matching Game Answer Key

Join Kira as she looks at a few fossils from the Cambrian Period that she found in Dinosaur State Park collections. She also discusses one of the top predators of the time. . . . you may be surprised by what it is!

Take a trip back in time and learn a little about earth's ancient oceans during the Devonian period!  Kira, a Naturalist at Dinosaur State Park, shares two amazing fossil from the their vault! Both fossils are from the Devonian period and are not normally available to view by visitors. This special presentation is the first in a series of videos to highlight other very special fossils at Dinosaur State Park.

Kira brings out two fossils from the Carboniferious period. Similar modern relatives of the plants that made the first fossil can be seen around the wetland at Dinosaur State Park!

Join Kira as she discusses the fossil that made Dinosaur State Park famous as well as the time period in which they were made. We have so many fossils that we needed to split the videos into two parts!

This is Part 2 of the Early Jurassic series. Kira reveals what dinosaurs likely made some of the tracks we have at the Park.